5 Sun. / Lent, C: To be forgiven the sin of adultery as to start a new life 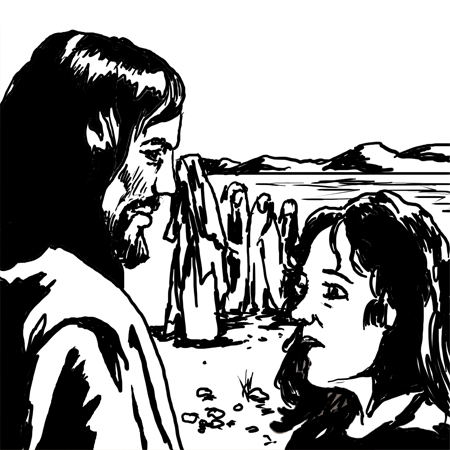 What would you respond when people asked you a tricky question, especially when they set up that question to trapping you? Jesus in today’s gospel encountered such a question. The Pharisees and lawyers brought to Jesus a woman whom they said they had caught in the act of adultery.

How could they catch her in the act of committing adultery? Were they peeping Toms, invading her privacy, which is wrong in itself. Anyway, it seems that they were not concerned about the sin of adultery rather than trying to trap Jesus and make it difficult for him before the Roman authority and the Jewish religious authority.

According to the Mosaic Law, a woman caught in adultery has to be stoned. If Jesus answered she should not be stoned, he would be opposing the Law of Moses (Dt 22:23). If Jesus agreed to the stoning, he would oppose the Roman law which, applied to the Jews at that time, forbade stoning a person to death. Moreover, if he agreed to the stoning, he would be contradicting his teaching on mercy and forgiveness. Thus, how could he respond to their question? What a dilemma!

The Gospel tells us Jesus bent down and wrote something on the ground with his finger. What he wrote, the Gospel did not record. Perhaps Jesus merely scratched some lines on the ground to show he was not interested in their concern. Then he challenged any of them without sin to casting a stone at her. At this point, none of them could make this claim. Reading the bible, we can see the scribes and the Pharisees were those whom, Jesus reprimanded often because they had tendency to finding faults. Their words were bold but their deeds were few. That is why Jesus called them hypocrites. If Jesus was hard with the scribes and the Pharisees, then he was kind and merciful to those who were sincere and humble and repented.

The Gospel tells us Jesus showed his mercy and forgiveness to the sinful woman so that she might start a new life. First Jesus assured her with a question about condemnation, which she had already known that nobody condemned her. She did not deny her sin of adultery. She only answered nobody condemned her. That means those accusers implied their own sins since they went away orderly without stoning.

Then Jesus promised not to condemn the woman. Not to condemn her does not mean that Jesus tolerated her sin. That is why Jesus told her to go home and stopped sinning: Go, and from now on do not sin any more (Jn 8:11).Jesus’ words and deeds proved that he hated sins, but loved sinners.

In the Gospel, Jesus called upon the woman to begin a new life in grace, accepting Jesus’ mercy and forgiveness. The theme of starting new is also found in the first and second readings of today’s liturgy. The prophet Isaiah today thinks of a new exodus (Is 43:19) for the chosen people of God. It was the exodus from slavery in Egypt, but a new exodus from Babylonian captivity back to Jerusalem. In his letter to the Philippians, Saint Paul preaches a new beginning in the life of grace in Christ. We cannot really live in the new life of grace in Christ unless we admit in our hearts that we are sinners. There are certain kinds of sin we commit and the reason we commit those kinds of sin are because, we have problems. To say bluntly, we have psychological problems. When we tackle those problems, I mean when we get rid of those problems, we will stop sinning.

for this problem or that problem of sinning.

Here we do not talk about sins committed for economic reasons like at a pinch, no man is completely honorable or for thoughts directing actions like what emerges from within a man, that and nothing else is what makes him impure (Mk 7:20-23). We only mention sins committed due to psychological reasons. The sins committed due to psychological reasons might be loneliness, curiosity or desires in wrong ways, or jealousy, or low self-esteem, or inferiority complex, or lack of self-satisfaction or unfulfilled wish, or past sexual abuses by adult(s).

For example, due to loneliness, people might get involved in illicit relationship. To understand the reason for sinning is partly healed. Then we will find ways to eliminate those causes of sins and seek God for help to deliver us from those sins. When we have been healed of our problem and our sin, we would be happy and grateful that our problem and our sin have gone and we are now free of those problems.

Prayer for avoiding the near occasions of sin:

You are rich in your love, mercy and forgiveness.

Human beings are weak and sinful.

We tend to find faults with others,

paying attention to the speck (1) in people’s eyes,

yet ignoring the plank (2) in my own eyes.

Today I prostrate myself before you, confessing my sin.

Forgive my sin so that I may live in grace

with you, risen from the dead. Amen.