Living in unity with God and in communion with the Church

The two theological concepts of this title are not separate, but linked together. In this way, union with God leads to communion with the Church because the Church was founded by Christ Himself on the rock of Peter (Mt 16:18) and is the Mystical Body of Christ (Rom 12: 4-5; 1 Cr 12:27; Col 1:18). 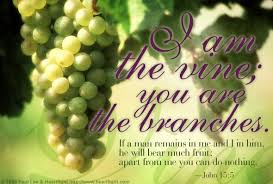 To see the article in Vietnamese of the same title and the same author, please click on this link: https://www.mucvuvanbut.net/bai-viet/bai-viet-cua-tac-gia-trang-chu/5693-s-ng-k-t-hi-p-v-i-thien-chua-va-hi-p-thong-v-i-giao-h-i

Living in union with God

To help the disciple understand the relationship between God and man, Jesus used the example of a vine and a branch of grapes to describe unity. Jesus likens him to a vine, the Father to a grower and the believer to a branch (Jn 15: 1-5). How to be united with God? The believer in union with Christ is not an external union like joining a certain organization or association. The believer is united to God by grace. Sin interferes with grace, thus reducing the union with God. To be united with God, the faithful need to remain in the Lord's love as Jesus invites: "Stay in my love" (Jn 15: 9).

To explain this union, St Paul appealed to the concrete example of the human body. Although made up of many limbs, the body forms a single unit. Paul sees the unity in a body similar to that in the mystical body of Christ, the Church. In the Mystical Body of Christ, which is the Church, Christ is the head, and the faithful are members. Paul is the person - more than anyone else - who understands this theological notion of Christ's Mystical body for having experienced it himself. On the way to Damascus to persecute Christians, Paul was shone by a light and stunned by it. He was fell to the ground, from the horse's back, and heard a voice saying: "Saul, Saul, why do you persecute me ”(Acts 9: 4). In fact, Paul only persecuted Christians, not the one whose voice he heard. Later, thanks to prayer, meditation, and the light of the gift of the Holy Spirit, Paul understood why persecuting Christians, is persecuting Christ himself, because Christians are members of Christ's Mystical Body. Only later did the Church develop the meaning of communion with the Church.

The believer lives and works, not alone, but living and working for love of God and in union with God. Paul knows the concept of living in union with God when he writes, "The life I live now is not my own; Christ is living in me” (Gal 2:20).

For practical application, in the morning right after waking up, the faithful could recite some brief prayers, then thank God for giving them the night of peace, thank God for another day of life, and then offer God all the works of the day: school, job, worship, religious works, eating and drinking, socializing, entertainment.

At night before going to bed, the faithful do not forget to pray either with family or in private, praying long or brief depending on their circumstances and situations. Then they offer their sleep to God, asking God to send angels to keep them and family members safe.

When going away from home or traveling, the faithful offer their bodies, senses, minds and souls, asking God to send his angels to enlighten, guide, protect, and keep them safe through tribulation and danger. The faithful invite God to go with them wherever they go, to work, eat, sleep, entertain, and to go on a vacation with them. In order for God to go on a vacation with them, pious faithful avoid going on Saturday afternoons or Sunday mornings, so as not to miss the opportunity to attend mass to worship, thank and pray. Inviting God to a vacation with them includes scheduling the program beforehand to see on a particular the Sunday, where and when they can attend mass. If travelling in the United States, people can call a toll free number: 800-627-7846. To make it easier to remember by calling “masstim”. The person at the other end will tell different times for mass and the address of the Church.

At that time, Thérèse of the Child Jesus only studied until the sixth grade, but in 1998 was named a doctor of the Church. Why is it so paradoxical?

The answer is Thérèse taught people: religious, non-religious, high-educated, low-educated, men, women, seniors, young and old and children, how to work for the love of God and in union with God. Thérèse did not do anything extraordinary, but only performed ordinary, daily tasks in an extraordinary way, that is, in union with God and for the love of God.

A story goes like this while she was washing clothes, another sister shot bubbles over Thérèse's clothes for unknown  reason. Thérèse did not object, but considered it as spiritual rose petals, offering to God in prayers for the conversion of sinners. It is also noted that Thérèse intended to apply for a monastic life at the Hanoi Cloister. Her intention was not fulfilled because of her death at the age of 24 from tuberculosis.

From birth, God chose the little and weak to reveal His love and power, and God chose the lowly and humble to cooperate in God's redemptive plan. God loves those of simple hearts as He said:  “Unless you change and become like little children, you will not enter the kingdom of God” (Mt 18:3).

Thérèse lived the theology of humility and simplicity, in the spirit of the Gospel, and completely entrusted herself to God in the "childhood way". Thérèse's path to holiness was to live a simple life, surrendering to God's love and providential plan. Saint Thérèse was loved by the Church and the Church also loved her simple and trusting way.

By conferring a Doctor of the Church on Saint Thérèse, the Church accepts the saint's religious lifestyle and wants the faithful to follow her example, to live in a simple and trusting way

In this way, anyone can live the way of Saint Therèse. The faithful live in union with God, work for the love of God by offering all the works of the day: eating, resting, working, entertaining, even feelings of joy, sadness, difficulties, sickness and disease. Living in union with God and working for the love of God, will make the work easier, more meaningful and beneficial to souls before God. On the contrary, living and working in a mechanical and perfunctory way, one may feel that the work is heavy and depressing.

Living in union with God generates a spirit of communion with the Church. Communion is a concept found only in the Church. Social, cultural, political, friendly, corporate, business organizations may be united, but not in communion.

Communion is the characteristic of the Catholic Church. Other denominations or political, cultural and social organizations may have unity without communion. Communion implies unity by grace. Communion also implies empathy meaning sharing in affection and desire. For example, a concern and distress of the leaders of the Church must also be the concern and distress of each believer and of the whole Church. When there is joy, sadness, anxiety or hope in the Church, the clergy and the laity are also in communion and sympathy for joy, sadness, anxiety and hope with the Church, which is called idiomatically in Latin "Sentire cum Ecclesia". This is what St. Paul teaches: "Rejoice with those who rejoice, weep with those who weep" (Rm 12:15).

Going specifically, the Church's grief over the US-European media/press exposing and exaggerating the sexual abuse of a small number of the world's clergy as a form of persecution of the Church in the first decade of the 21st Century, for example, must also be the grief and shame of every member of the Church.

Communion with the Church is not separate from union with God. The Church is holy, so believers do not criticize the Church, because the Church established by Christ is as holy as Catholics profess when reciting the Nicene Creed: "I believe in one, holy, catholic and apostolic  Church”.

However, the faithful can still criticize those wrong words and deeds of individuals in the Church, even high-ranking Church officials. There was a certain case when an archbishop of a country with a population, ranked 15th in the world in 2019, was asked about about criticisms in the Church, and he replied, “One should not stand outside the Church and criticize her because that is criticizing oneself.” Is it that the archbishop was still familiar with the culture of a time and of a region, that highly valued the clergy and the hierarchy and wanted to keep a good name for them?

In order to maintain a good reputation for the person being criticized, the critic may use critical expressions to refer to the person being criticized, without the reader knowing who it is. Only the litigant knows and some readers who follow the case might know who the criticism is aimed at. That is enough for people who "have a problem to be aware of it" and to correct it.

Pope John Paul II has repeatedly (more than 9 times) apologized to certain groups of people around the world for past acts of injustice by members of the Church. Apologizing is admitting that you are at fault or that your predecessors  made a mistake in order to be forgiven. Otherwise, people will be resentful in their hearts, causing the relationship of the parties involved to be hindered and unable to develop.

Pope Francis has also criticized and imposed penalties on Church officials for abuses such as abuse of power, abuse of money and sexual abuse of minors. He also criticized the 15 illnesses of the Roman Curia. In addition to the 15 illnesses that Pope Francis talked about in the Roman Curia, Gia Nhan in "Dissecting the problem of showing, boasting and performing religious acts”, wrote "Suppose they knew 15 illnesses of the Roman Curia, which Pope Francis mentioned, also applies to the local level of dioceses, religious orders of men and women, parishes, associations of Catholic Action. Surely their respect must have dropped a lot”. When used to constructive criticism, clergy as well as laity will self-check to avoid complacency.

Christ himself taught the apostles to correct their mistakes when a brother committed a sin in three stages: (1) Personal error correction. (2) Call two witnesses to convince the offender. (3) Present the issue to the faithful community to preserve the mental health of individuals and communities (Mt 18: 15-16).

Christ uses the image of the vine and the branches to describe the union between God and his disciples. To be united with God as Christ invites the faithful as he invites the apostles: "Remain in my love" (Jn 15: 9). The purpose of establishing the Church with the selection of Peter as leader is to gather the faithful in the unity of faith and the spirit of fraternal communion (Church # 18). In addition to living and working in union with God and communion with the church, the faithful also need to pray for the two concepts to be realized.