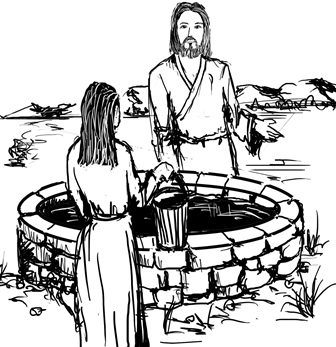 3 Sunday of Lent, Year A

In order to understand why the Samaritan woman tried to argue with Jesus as well as the way Jesus used to bring her to faith, it is necessary to know something about the geographical, historical and religious backgrounds of Palestine at the time of Jesus. Palestine at that time was divided into three provincial regions: the north was called Galilee, the South Judea and the Central Samaria. Since the eighth century before Christ, Samaria was occupied by Assyria. Jewish law did not allow a Jew to marry a pagan. However, the Jews in Samaria eventually accepted the occupants and intermarried with them. That made the Jews in Judea angry.

They looked down on the Samaritans, considering them as half-breeds and heretics. Later on, Judea was also colonized by the Babylonians. However, the Judean Jews did not assimilate with foreign occupants. That is why when Jews in the South wanted to go to Galilee in the North and vice-versa, they did not want to cross Samaria, but made a detour to avoid setting foot on Samaria. The two groups of people did not associate with each other due to that enmity.

However, the Samaritans still believed and accepted the Pentateuch as the Judean Jews did. They also waited for the coming of the Messiah like the Jews. The gospel today tells us Jesus went through Samaria to a town of Sychar. When he sat down to rest at the well of Jacob, he encountered a Samaritan woman who went out to get water. Facing a hostile and distrustful woman, Jesus tried to break the ice by asking the woman for a drink. The custom in Palestine at that time did not allow a man and a woman to meet and talk in public, especially a religious leader and those in high positions like Jesus. That is why the woman said sarcastically to Jesus how a Jewish man could ask a Samaritan woman for a drink? To respond, Jesus told her if she would recognize the gift of God and the one who asked for the water, she would have asked for the living water. The woman retorted that Jesus had no bucket to get water from the deep well. Jesus told her: Whoever drinks the water I shall give, will never thirst (Jn 4:14).

At this, the woman seized the opportunity asking for the living water so that she would not have to go far away to get it – even though she did understand what kind of water, Jesus would give. Now he recognized that Jesus had something to offer her. When she said she had no husband, Jesus caused an awakening in her heart by bringing to light her private life. Jesus told her she had five husbands and the one she was now living with was not her husband either. At this, the woman recognized Jesus had moral perception and said to him: I can see you are a prophet (Jn 4:19).

She then changed the subject wondering where people should worship God. Jesus told her not to worry about where people should worship God, because the day would come when people would worship not just in Jerusalem or on the mountain of Gerizim, but everywhere all over the world. She also understood when the Christ would come; he would tell her people everything. The story continues up to this point, when the woman hurried back and told her townsfolk about what she had seen and experienced. Her people rushed out to see Jesus. They put their faith in him as the messiah-savior. The confrontation between Jesus and the woman shows she was a tough woman, politically, theologically and racially minded and discriminated. Facing Jesus who has moral perception as the woman sees it; the woman realized the reality of her life and softened her heart. She also realized the reality of the supernatural entity: God is not limited to be worshipped here or there, in Jerusalem or in Gerizim in Samaria.

The confrontation between the woman and Jesus showed she was a woman of reason with political mind, ethnic and sectarian discrimination. She was also a tough woman – so tough. That is why some men are afraid of tough wives. In case, a wife has a black belt in certain kind of martial arts, it is more fearful. However, in the last analysis, the Samaritan woman was not so fearful since she was open-minded, yielding to reason and accepting the truth, although gradually. If she actually tough, she could counter Jesus’ revelation of her private life by saying: Do not mind my own business. Facing someone who has moral perception, would elicit respectful consideration and would not invite opposition from others. For instance, when someone wants to attack an opponent who has moral perception, his/her hands and tongue gradually become weakened, unfit for action. Facing Jesus whom the Samaritan woman realized he had moral perception, she realized the reality of her private life and let her heart soften. She also recognized the supernatural reality that God is not limited to any place of worship here or there.

From his request for water, Jesus led the Samaritan woman to open her heart gradually. First, she saw Jesus as a Jewish man, then called him Sir, and then recognized him as a prophet, and eventually the Messiah by saying: Could he possibly the Christ? (Jn 4:29).

Thus, the gospel story shows Jesus came to bring the saving grace not only to the Jewish people, but also to the gentiles through his offering of the living water to the Samaritan woman. The living water, according to Saint Paul in his letter  to the Romans, is the love of God poured out into our hearts, through the Holy Spirit (Rom 5:5).

Prayer asking for the living water:

Once upon a time, our ancestors were also gentiles.

Thanks to those missionaries, my ancestors received the gift of faith.

As a result, I myself was granted the gift of the living water.

If I get lost in any area of my faith life,