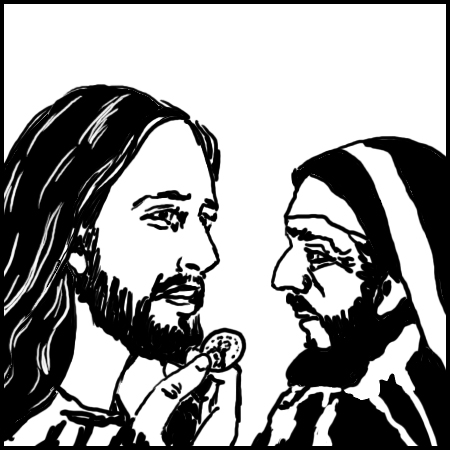 It was published in Vietnamese in the US 2007 and republished in Viet Nam 2010. To keep the author’s writing style, this homily has not been edited and may not be by a hired hand. However, if readers would like to point out mistake(s) in spelling and grammar and to suggest English phrases and expressions, it would be greatly appreciated by the author, whose English is not his mother tongue and who did not live in the US until his adulthood. Passive sentences are used intentionally in this context to avoid using the first personal pronoun ‘I’ when applicable, that might be associated with any idea of egotism, in accord with the French saying, known as: ‘Le moi est haissable’ (The ego is detestable).

The Pharisees in today’s Gospel teamed up with the Herodians to draw Jesus into political-religious confrontation. The Pharisees were a religious sect in Judaism, considering themselves more educated and holier than others. They often criticized and judged Jesus’ words and actions, thinking Jesus acted out of their ancestors’ tradition. In turn, Jesus himself often warned them, calling them hypocrites because they performed religious acts for show without love for God. The Pharisees resented paying tax to the Roman government. A tax concerned here was the census tax levied on men from fourteen to seventy-five and women from twelve to seventy-five. As for the Herodians, they favored the Roman rule and thus supported puppet king Herod’s rule.

Before setting a trap to catch Jesus, they tried to flatter him by praising him as a truthful and impartial man (Mt 22:16). Then they put a question before Jesus: Is it lawful to pay the census tax to Caesar or not (Mt 22:17)? The question seemed to be simple, but their intention was not. If Jesus answered yes, meaning it was lawful to pay tax to Caesar, and then he would be considered reactionary and thus losing influence among the people who wanted to be free from the foreign power. If Jesus answered no, meaning it was unlawful to pay tax to Caesar, the Herodians would denounce him before the Roman authority as opposing the Roman rule.

From the book of the prophet Isaiah, we learn that God anointed king Cyrus, the Persian and gentile king to subdue the Babylonian empire as to bring back his chosen people to Jerusalem from exile (Is 45:1). The second Vatican Council tells us about relations between civil and divine authorities as follows: The more that both foster sounder corporation between themselves with due consideration for the circumstances of time and place, the more effective will their service be exercised for the good of all (Gaudium et Spes # 76).

According to the teaching of Jesus, then God and Caesar, each has his proper claim on us. By telling us to pay tax to Caesar, Jesus upholds the legitimate power of Caesar to maintain order and the common good in the human society. Even though it was the colonial government, but in that colonial period, the colonial government could also provide certain services to its citizens.

Paying tax was a means to help the government maintain order and social welfare. Jesus himself set an example in paying the temple tax so that others may not be dis-edified, even though interpreted according to the temple law, he was exempted. He told Peter: Go to the lake, throw in a line, and take out the first fish you catch. Open its mouth and you will discover there a coin worth twice the temple tax. Take it and give it to them for you and me (Mt 17:27). Obeying the civil law, Joseph made a trip to Bethlehem to register with Mary according to a decree ordering a census by Caesar Augustus (Lk 2:1-7).

Civil obedience supposes that civil law is based on and corresponds with the divine law. When a civil law opposes God’s law, a Christian has to express position. The Christian has double citizenship: civil citizenship and citizenship of God’s kingdom. As a citizen of a nation, the Christian is to pay tax and follow the legitimate law of the land. Moreover, according to Jesus’ teaching, the Church also encourages the faithful, citizens of a nation, to participate in a civil government. However, the church as a whole and the priests do not participate in a civil government (Can. 285.3), or bring party politics to the church because the church is a transcendent entity, standing above all political entities.

The Church has a lasting character, while a ruling political party has power only when it holds office. The second Vatican Council reaffirmed its position on the Church and a political entity as follows: The Church, by reason of her role and competence, is not identified in any way with the political community, nor bound to any political system. She is at once a sign and a safeguard of the transcendent character of the human person (Gaudium et Spes # 76).

When Pope John Paul II visited America, he told a priest being a member of the House in North America, and another priest, being a government minister in Central America that if they wanted to remain priests, they had to abandon politics. The reason is that to play party politics can be tricky and deceitful. To be tricky and deceitful is not compatible to priestly ministry. Moreover, in order to attract votes from this group or that group, a priest holding a public office might have to support a view that is contrary to the Church teaching. As citizens of the kingdom of God, we have our duty to repay to God what belongs to him. We repay to God our worship, hope, love and our observance of his commandments. We repay to God our financial contributions in order to build, repair and maintain God’s house of prayer. We repay to God our apostolic works as to build his kingdom on earth and to make his name hallowed. We repay to God our service and charitable works to our fellow beings.

A prayer for knowing what to repay to God and what to Caesar:

Oh Lord, we thank you for coming to teach us

how to differentiate between civil and divine authority.

Grant that the law of nations may reflect your Law.

As for those lawmakers who do not know you,

may the law they make reflect the natural law

implanted in their righteous conscience.

Teach me to observe the just law

as to guarantee order and public services.

Teach me to observe your law

so that our relationship may grow. Amen.