Corpus Christi, A: Whoever eats this bread will live forever 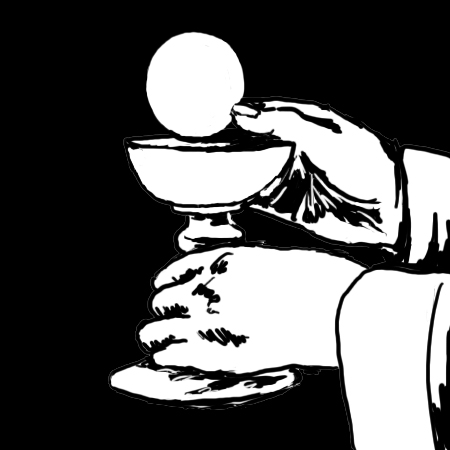 Before the Ascension, Jesus gave us, the most precious gift out of his love. That is his Body and Blood. At the Last Supper, Jesus instituted the Eucharist for our spiritual food and drink so that he could remain with us sacramentally until the end of time. The Last Supper [1] was the first mass celebrated by Jesus with the apostles before his suffering and death on the cross.

The masses to follow, celebrated all over the world, according to the command of the Lord: Do this in memory of me (Lk 22:19) is the renewal of the sacrifice on the cross. To partake of the sacrificial offering is a sign that we accept the new covenant with God. The Jews in the Old Testament lived by the word of God. God’s words were their reason to live and their source of hope even though they faced difficulties, sufferings and hardships as the book of Deuteronomy says: Not by bread alone does one live, but by every word that comes forth from the mouth of the Lord (Dt 8:3).

The Protestants also live by the word of God. God’s words foster their faith. Jesus’ teaching on the Eucharist as the bread of life scandalized the Jews. They argued among themselves: How can this man give us his flesh to eat (Jn 6:52). For Catholics, the Body of Christ is also our spiritual food as Jesus tells us: This is the bread that came down from heaven. Unlike your ancestors who ate and still died, whoever eats this bread will live forever (Jn 6:58). The manna which God gave to the Jews in the desert (Dt 8:16) was to nourish their body and was understood as a foreshadowing of the bread of life. The bread of life, which is the Body of Christ, is to nourish our soul as Jesus tells us: Whoever eats my flesh and drinks my blood has eternal life and I will raise him on the last day (Jn 6:54).

To be turned into bread for physical nourishment, the grain has to undergo processes like being un-chaffed, grounded, blended into flour, then baked, broken and distributed to people to eat. In a similar way, to become the sacrificial offering for the remission of sins and be united with God, Jesus also underwent such processes as being rejected, opposed, persecuted, tortured, beaten, crowned with thorns and crucified on the cross.

He offered himself as to become the living bread for humankind to eat. To receive the Body of Christ, the faithful try to live, according to the way of the Lord and to keep his commandments as to inherit eternal life. Believing in the word of God could unite the Jews together for thousands of year. Believing in the word of God can also unite the Protestants. Through our belief in the word of God and reception of the bread of life, the faithful are united in the mystical body of Christ as Saint Paul in his second letter to the Corinthians states: Because the loaf of bread is one, we, though many, are one body, for all partake of the one bread (1Cr 10:17).

Today Jesus invites us to his Eucharistic table as to receive his body. To respond to his invitation, we pray for the grace to avoid what is called familiarity-breeds-contempt attitude as to show reverence and love towards the Eucharist. We do not appreciate what we always have. Only when we lose it, would we miss it. Suppose for a long time, we do not have mass and the Eucharist, we would appreciate mass and the Eucharist more dearly. We also pray as not to offend the Body and Blood of Christ as Saint Paul warns us: Whoever eats the bread or drinks the cup of the Lord unworthily, sins against the body and blood of the Lord (1Cr 11:27).

And we also pray asking the Lord to grant us eternal life as the priest celebrant prays silently at mass at the breaking of the bread: May this mingling of the Body and Blood of our Lord Jesus Christ bring eternal life to us who receive it.

A prayer for eternal life thanks to the reception of the Eucharist:

Lord Jesus, we thank you for the bread of life.

We thank you for your institution of the Eucharist

for our spiritual food and drink.

I am sorry for the times I received Holy Communion

in a mechanical way, in a routine fashion, without preparation.

For the times I showed disrespect for the Eucharist.

Renew my faith in your real presence in the Eucharist.

to nourish and strengthen my soul. Amen.

1. According to the gospels of Matthew (Mt 26:26-28) and Mark (Mk 14:22-24), it is presumed that Judas was not present when Jesus instituted the Eucharist, since according to the Gospel of John, Judas had eaten the morsel (Jn 13:26) before Satan entered his heart (v. 27) and then went out (v. 30). According to the Gospel of Luke, Jesus instituted the Eucharist (Lk 22:19-20) before he foretold Judas’ betrayal (v. 21). Following the line of thought, it seems that Judas did eat the body of Christ.