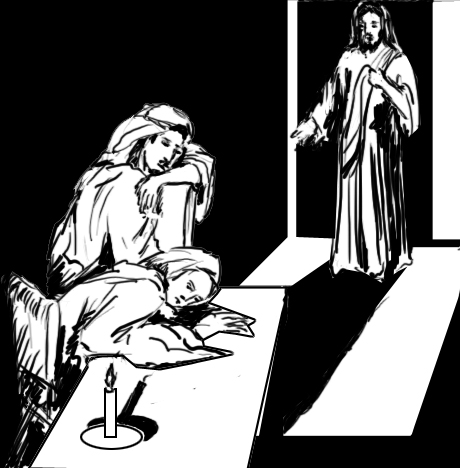 1 Sunday of Advent, Year B

It was published in Vietnamese in the US 2008 and republished in Viet Nam 2011. To keep the author’s writing style, this homily has not been edited and may not be by a hired hand. However, if readers would like to point out mistake(s) in spelling and grammar and to suggest English phrases and expressions, it would be greatly appreciated by the author, whose English is not his mother tongue and who did not live in the US until his adulthood. Passive sentences are used intentionally in this context to avoid using the first personal pronoun ‘I’ when applicable, that might be associated with any idea of egotism, in accord with the French saying, known as: ‘Le moi est haissable’ (The ego is detestable).

Each year when the season of Advent comes, it gives us a feeling of hope and expectation. The four weeks of Advent stand for hundreds of years the people of the Old Testament longed for the coming of the Messiah. That is why the Old Testament is called the story of waiting. The Book of the Prophet Isaiah today acknowledged the sins of the people, their infidelity and forgetfulness of God.

Therefore, the prophet implored with God to come down to deliver his people from misery and bring them back to the righteous way, praying: Return for the sake of your servants, the tribes of your heritage (Is 63:17). With this prayer on behalf of the people, the prophet stirs up in them a sense of hope to serve as nourishment for their spiritual life.

While they longed for the Messiah to come, the prophet also reminded them that God also waited for their return to him, because they had forgotten God and had wandered away. In his letters to the Corinthians, Saint Paul told us the Corinthian were undergoing a crisis in the community. They were divided into factions and lived in disorder after Saint Paul had departed from them. That is why he told them to be faithful to the end and put their hope in the second coming of the Lord (1Cor 1:8). As for the Romans, they were facing persecutions. Saint Mark told them to be watchful.

Facing those problems, the prophet Isaiah reminded the Hebrews of putting their hope in the Messiah to come. Saint Paul told the Corinthian to be faithful to the end. Saint Mark called upon the Romans to be watchful, repeating four times to watch for the second coming of the Lord (Mk 13:33, 35, 36, 37): to watch in the evening, at midnight, at cockcrow and in the morning. To watch or to be watchful is not an inactive state, sitting to wait in idleness, but a state ready for a next move. According to the words of the prophet Isaiah, Saint Paul and Saint Mark, we have to try to rise in order to overcome obstacles, to look beyond problems, instead of being trampled by obstacles and problems.

The Advent season we begin today is the season of hope and expectation. Hope is our reason to live. For us Christians, the newborn Savior is our hope. The Church employs the liturgy of Advent to stir up in us a desire, called hope for the coming of the Lord.

A prayer for waiting in hope:

Oh Lord our God, you are the hope of all Christians.

Teach us to persevere in hope for your coming.

Deliver us from misery, suffering and sin.

Grant that we may be waiting in hope.

Do not let us be separated from you.

And be our reason to live. Amen.