32 Sun. / Ord. B: The entrusted offerings of two widows 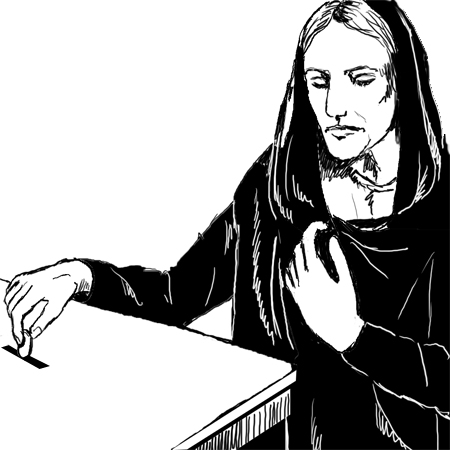 It was published in Vietnamese in the US 2008 and republished in Viet Nam 2011. To keep the author’s writing style, this homily has not been edited and may not be by a hired hand. However, if readers would like to point out mistake(s) in spelling and grammar and/or to suggest English phrases and expressions, it would be greatly appreciated by the author, whose English is not his mother tongue and who did not live in the US until his adulthood. Passive sentences are used intentionally in this context as to avoid using the first personal pronoun ‘I’ when applicable, that might be associated with any idea of egotism, in accord with the French saying, known as: ‘Le moi est haissable’ (The ego is detestable).

Today’s liturgy of the Word touches upon the generous offering of two widows. The first book of Kings mentioned the generosity of the widow of Zarephath. She had only a handful of flour and a little oil left for her and her son. Yet, at the request of the prophet Elijah, she was ready to bake a cake for the prophet first. As a result, God rewarded her faith and generosity by providing her with a miraculous supply of flour and oil as God said through the prophet Elijah: The jar of flour shall not go empty, nor the jug of oil run dry, until the day , when the Lord sends rain upon the earth (1Kgs 17:14). What she did makes us associate it with Jesus’ word to his disciples: He who welcomes a prophet because he bears the name of prophet receives a prophet’s reward (Mt 10:41).

The Gospel shows two opposite ways of worship. On one side was the group of scribes, who like to go around in long robes, accept greetings in the market places, seats of honor in synagogues and places of honor in banquets and recite lengthy prayers (Mt 12:38-40). They did so to exalt themselves, seek honor and praise from the public. Showing off like the scribes, but about another aspect were many rich people who put in large sums in the temple treasury. It was the temple priests’ job to record and announce the contributions.

Contrary to the contributions of the rich people, Jesus told the apostles about a small contribution of a poor widow. She gave only two small coins worth a few cents. The Temple priests must have recorded her offering and made announcement. That was why her two pennies were recorded in today’s gospel. Yet Jesus praised her generosity because she offered all she had to make a livelihood. Why did she give her last penny? The answer is because she put her complete trust and faith in God who even takes care of the birds of the air. She was poor in fact and poor in spirit. To be poor in spirit is to detach oneself from worldly values and from dignity and honor and pride and fame and praise.

True charity which two widows taught us today is not to give away furniture, clothes, food and money in surplus, but to share what is necessary for us. The widow of Zarephath thought a handful of flour and a little oil she used to make a little cake for her and her son to eat, then they would die because there would be no more flour and oil, but she was  still prepared a cake for Elijah first. However, God compensated for her generosity. Thus, the faithful’s contribution to the Church to do God’s work is not a contribution of the surplus. The contribution given is not for praise either. The contribution does not depend on feelings: to give only when one feels good, not to give when one feels bad. The contribution for apostolic, charitable and relief works must be a decision with prayers.

Only with trust and faith in God’s providence and love for others, the Christians can make sacrifice for others. That was what the two widows did. One widow used a handful of flour left in her jar and a little oil left in her jug to make a little cake for the prophet Elijah first. The other widow offered from all she had, out of her necessities.

To mention the offering of the widow, Jesus did not demand his apostles to imitate her. In a complex society of today with many needs, different purchases and high cost of living, Jesus does not require us to do as the widow did. However, we need to examine the way we use our material goods. The Christian is called to use his material goods for the apostolic work, the maintenance of church buildings and the charitable works.

On the cross, Jesus offered himself totally as the sacrifice of reconciliation offered to the Father. At mass, Jesus renews the offering of himself on the cross to the Father, by transforming the gift of bread and wine into his body and blood, the gift of himself to the Father. Along with the gift of bread and wine, we offer to God the gift of our joys, our sorrows, our work, our rest and ourselves. We ask Jesus to transform the gifts of ours so that they become part of his sacrifice. To prolong the sacrifice of the mass during the day, we offer to God everything we do of the day, along with our feelings of joy and sadness, worry and hope as to ask God to sanctify and transform our lives.

Prayer asking for a generous heart for God’s work:

You want your disciples to contribute to build the human society.

Teach us how to share our belongings and talents in solidarity

We offer to you our body, mind and soul

along with our senses and strength.

Transform our spirit and life. Amen.