When God created humankind, he gave us freedom to choose: either to accept or reject him. After having fulfilled the mission Moses gave, that is to bring God’s chosen people into the Promised Land, Joshua assembled the elders of the people at Sikem so that he could reaffirmed his belief in God. 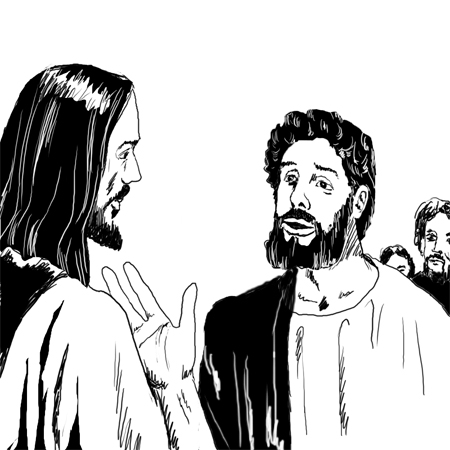 He said to them: If it does not please you to serve the Lord, decide today whom you will serve, the gods your fathers served beyond the River, or the gods of the Aromites in whose country you are now dwelling. As for me and my household, we will serve the Lord (Jos 24:15). Then, the Israelites made their decision. They were determined to worship the one true God because it was he, who rescued them from the Egyptian slavery, worked great wonders and brought them into the Promised Land.

However, when they met difficulties and hardships in the desert, they were unfaithful, revolting against God. Every time they were repented, God was ready to welcome them back home with his open arms. When Jesus came, promising to give them his body to eat and his blood to drink, the Jews quarreled among themselves, saying, How can this man give us his flesh to eat (Jn 6:52).

The second group of listeners - his disciples - when hearing Jesus speak about eating his flesh and drinking his blood, were also murmuring about this, saying it was hard to accept it (Jn 6:60). According to the Gospel, many of his disciples returned to their former way of life and no longer accompanied him (Jn 6:66). The word disciple was understood as a person who followed Jesus and the number was counted to be seventy-two. When some of his disciples left, Jesus was not surprised, nor angry. He did not explain, or alter his statement with expectation to have a big catch of disciples. When it was the apostles’ turn, Jesus still challenged them further. He demanded from them a firm faith, not cautious, not hesitant. The apostles were shocked when he asked them: Do you also want to leave? (Jn 6:67). Either to stay or to leave, it was a question which they could not avoid answering.

To answer the question, Peter came forward, taking the leadership role, to answer: Master, to whom shall we go? You have the word of eternal life (Jn 6:68). He meant they had nowhere to go and no one else to turn to. Jesus demanded a firm decision from the apostles. This he received from Peter’s assurance. Peter’s commitment to the Lord dispelled all doubts from the other apostles.

All of us, who have decided to follow Jesus through baptism and confirmation, have to face the trials of faith. Each day of our lives, we are tempted to abandon our traditional faith in God. We hear many tempting voices each day from television, radio, newspaper, magazine and internet, telling us what to believe, what not to believe, what to do, what not to do, what to be questioned, what to be re-examined. We are tempted to practice our faith according to our temporary tendency, depending on enthusiasm. We go to church when we feel good, or stay home when we feel rotten. We are tempted to practice our faith only if the Church changes position on some moral principles according to our wishes. We are tempted to deny Jesus’s presence in the Eucharist when we do not understand why the bread and wine after the consecration still look like the bread and wine before the consecration.

That is the mystery of faith, which we, human beings, cannot explain and understand.

However, if we do not understand something, why do we believe? We believe, because we accept it on the authority of others. The apostles did not understand, but still believed because they accepted Jesus’ word. When we feel it hard to accept the teachings of the Church, reflected in the teaching of the Gospel, such as the teachings on sexuality, divorce, abortion, that is the time Jesus’ question echoes around our ears: Do you want to abandon the Church, which Jesus founded on the foundation of the apostles?

When we disagree with the Church on a certain policy that is the time a similar question echoes in our ears: As for you, do you want to accept the way of the Church of Jesus Christ? When we see scandals occurred among the clergy, a question will echo in our ears: Do you want to remain in the Church to pray for it and renew it? When facing those hard teachings (Jn 6:60), and strict observance in religion, then half-way believers and would-be followers attempt to make it less difficult, or to change it so as to make it  more suitable to their wishes and opinion.

The audience in today’s Gospel understood exactly what Jesus meant in his teaching. They knew Jesus did not mean eating his body and drinking his blood in a symbolic sense. That is why they considered it hard to accept. When we feel God whom we adore is so strict if compared to other gods, that is the time the question asked by Joshua will echo in our ears: If it does not please you to serve the Lord, decide today whom you will serve (Jos 24:15)?

Happy is a family or a parish, which has somebody who can say something, which expresses a firm faith like Joshua or Saint Peter to help members of the family or the parish stay together in faith.

Prayer for perseverant faith in the bread of life:

We thank you for giving us the Eucharist

as our spiritual food and drink.

May the Eucharist we receive

satisfy our spiritual hunger and thirst.

And may we hold firm to your word.

Do not let us listen to seductive voice

lest I deny you and be separated from you. Amen.