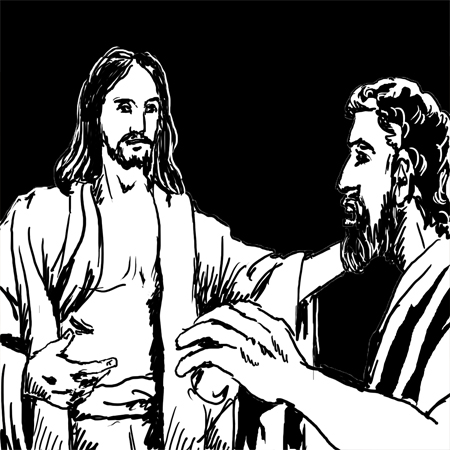 Did anyone dare to go against a strong current running downhill, sweeping flowing things away, or only risky persons did that? Trend of libertine thoughts, dissolute ways of living in today’s society with modern and fast forms of communication are similar to the strong current. Besides the strong current, there are weaker currents running slow on either side of the bank.

In order not to be swept into the strong current, one has to use one of the two ways. One way is to paddle a small boat closer to the bank and occasionally hold on to roots or branches. Another way is to build a sturdy raft for group sailing: some using a paddle or stick to hold the raft from moving down the strong current; others use long poles to push the raft against the current. To live in today society, one only needs to click the mouse, then news and pictures can appear on the computer screen in an instant. Therefore, we have to stick together to support our healthy values and keep our faith.

People also come together for two main reasons. One reason is to share a common goal such as to go to the street to protest somebody or something. Another reason is to share the same feeling such as to go to a wedding in order to share happiness with somebody, or to go to a funeral for sharing sorrow with somebody else. After the death of their master, it was fear that the apostles came together as the united group. For fear of the Jews, the apostles gathered in the upper room in Jerusalem behind the locked door. In the event of the crucifixion, the apostles gathered to pray, to seek support from one another, except Thomas. Thomas was in hiding somewhere. He alienated himself from the rest. And his faith was so shattered that he said: Unless I see the mark of the nails in his hands, and put my finger into the nail marks, and put my hand into his side, I will not believe (Jn 20:25).

Happily, the risen Lord had to appear and speak to Thomas personally to strengthen his shattered faith. Thomas answered and said to Jesus: My Lord, and my God (Jn 20:28). A Christian community or in a stricter sense, a catholic community is called the community of faith consisting of those who share in the same faith and follow the same goal.

Therefore, if we want to keep our faith unshaken, we have to remain in the community of faith, worship and do religious and social activities with the community. When we are gathered with the community of faith for worship and activities, our faith will be strengthened. If our faith is strong, we can help strengthen the faith of others. The faithful in the early church according to the Acts of the apostles, relied on one another by their collective faith of one supporting the other that they could share all things in common (Acts 2:44). And Saint John tells us by faith, the faithful conquers the world (1Jn 5:4).

Our faith relies on two dimensions: vertical and horizontal. A vertical faith means God from above invites us to faith and we from below respond. A horizontal faith means we depend on one another for faith. We also depend on our parents, godparents, relatives, friends and fellow parishioners to help us strengthen and develop our faith. We need to seek those with strong faith to foster our weak faith. And our faith must be put into practice if it is to be mature. Otherwise, it would be like what Saint James said: Faith without action is dead (Jas 2:26). Therefore, those who say they they can keep their faith inside themselves are to deceive themselves.

On the contrary, if we separate ourselves from the community of faith, our faith will become shaken when we are criticized and attacked by those who are against our faith life. For practical application, we can put faith in action by prayer, mass attendance, sacrifice, and good works. If we were angels, we do not need symbols. As a human being with a body, we need to express our faith in such gestures and body postures as genuflecting, kneeling, folding of hands, bowing of heads to stir up our internal religious feelings.

We also need to have symbols such as religious statues in our home or rooms to remind us of God’s presence. Thus in the Catholic Church, we have a whole support system for our faith by the intercession of Mary and different saints, by prayers and support from our fellow Catholics. Otherwise, our faith would become isolated.

Today the second Sunday of Easter is celebrated as Divine Mercy Sunday throughout the Church. In 1931, Jesus appeared to Sister Faustina Kowalska, a Polish nun, now a saint, telling her to spread devotion to his divine mercy. Jesus told her to paint his image according to the pattern she saw, with the inscription: Jesus, I trust in you.

Jesus further asked that a novena to the Divine Mercy be made beginning on Good Friday. On each day of the Novena, the Divine mercy chaplet is prayed on ordinary rosary beads. A prayer to the divine mercy is repeated like Hail Mary: For the sake of His sorrowful Passion, have mercy on us and on the whole world, etc. for nine days. Besides, we can repeat our trust in Jesus anytime, anywhere: Jesus, I trust in you.

A prayer of the fifth day of the Divine Mercy Novena Chaplet: [1].

Most Merciful Jesus, Goodness itself,

You do not refuse light to those who seek it of You.

Receive into the abode of your Most Compassionate Heart

the souls of those who have separated themselves from Your Church.

Draw them by your light into the unity of the Church,

and do not let them escape from the abode of Your Most Compassionate Heart;

but bring it about that they, too, come to glorify the generosity of your mercy.

Eternal Father, turn Your merciful gaze upon the souls of those

who have separated themselves from Your Son’s Church,

who have squandered your blessings and misused Your graces

by obstinately  persisting in their errors.

Do not look upon their errors,

but upon the love of your own Son and upon His bitter Passion,

which He underwent for their sake, since they, too,

are enclosed in His Most Compassionate Heart.

Bring it about that they also glorify your great mercy