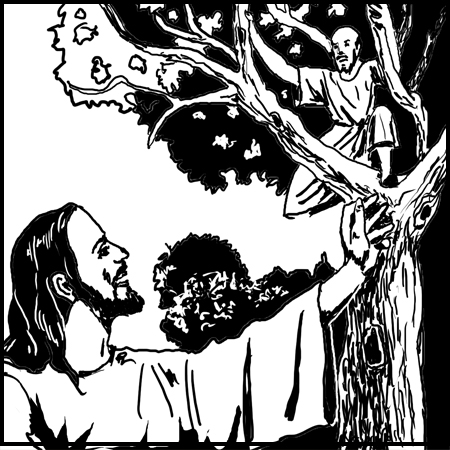 Every nation needs tax money to run the government machinery, to maintain law and order and to provide public services. However, tax systems can be unjust. Even a fair system of tax still has some flaws with deductions and exemptions of which some people can take advantage to cheat. That is why there is a story in today’s gospel.

Zacchaeus, the chief tax collector of Jericho, must have heard about Jesus and his teachings and miracles. Therefore, today, he wanted to see Jesus who intended to pass through Jericho. This was a rare occasion for him to seek every means in order to be able to see Jesus. However, the crowd pressing in ahead of him, made him unable to see Jesus because he was short in stature.

Luckily, because Jericho had fertile land, there were many sycamore and date trees on both sides of the road. The sycamore tree has a short trunk and many low branches, ideal for climbing. Even though Zacchaeus was short and not a professional tree climber, he was still able to climb the tree to see Jesus. Unexpectedly, Jesus looked up the tree, calling him: Zacchaeus, come down quickly, for today I must stay at your house (Lk 19:5). If we put ourselves in Zacchaeus’ situation, we would feel how he felt. He was a short man, looked down by the people because he collected heavy tax, and he did it for the Romans who were ruling over them. Today he acted like a boy, climbing up the tree without concern of being ridiculed in order to be able to see Jesus out of curiosity. Yet, Jesus noticed him, calling him by name, and wishing to stay at his home. How did Jesus know his name? How special for Zacchaeus! Zacchaeus climbed down happily and quickly from the tree in order to welcome Jesus to his house. That Jesus went to his house made many Jews, especially the Pharisees frown. They did not approve his association with a sinner (v.7). According to them, Zacchaeus was a sinner, because he defrauded people by collecting tax for the Roman colonialists.

The Roman government at that time did not tax people directly, but made contracts with local people to collect tax for them. Zacchaeus got the contract to collect taxes for the Roman Empire. And he was the chief tax collector. If he collected more than the amount of his contract, he was allowed to keep the surplus. The gospel today tells us Zacchaeus was a wealthy man due to his over collection of taxes from people. That is why tax collectors were often looked down by people.

Before God, Zacchaeus repented his sins. His sincerity in repentance was proved by his decision, to pay back fourfold what he may have extorted from anyone. Legally, he did not have to return fourfold, but he did it voluntarily. Moreover he even promised to give half of his possessions to the poor. The climax of the story was when Jesus announced: Today salvation has come to this house because this man too is a descendant of Abraham (Lk 19:9). Jesus’ words meant his sin was forgiven. Thus, we can see the call of Jesus not only freed Zacchaeus from sin, but also he was freed from the chain of greed that had kept him in bondage. Although wealthy, Zacchaeus was not happy with his troubled conscience. Jesus’ teachings and his presence did awaken his conscience.

Today each one of us needs to ask ourselves: what is the chain that keeps us in bondage? It can be greed, selfishness, arrogance, jealousy, anger, revenge, fame, pleasure or any kind of unhealthy addiction that has kept us in bondage. In order to be free, we have to cut off the chains that have kept us in bondage, the chains that are obstacles to our relationship with God. God is standing outside knocking at the door of our souls, and waiting for our response.

If we decide not to open and invite God to come in, there is nothing that God can do about because he has given us free will and he respects our freedom to choose: either yes or no. God does not force his will upon us. He only invites. If there is no freedom to choose, there will no reward and punishment. In order for God to awaken our conscience, we must form a right conscience. If a conscience is callous, and if a good conscience is suppressed, even God cannot do anything about it.

Prayer asking for the grace of conversion of heart:

Oh God, you are just and righteous.

We thank you for giving us our hands and mind to work.

Give us courage so that we can cut off

any chain of sins and vices that bind us up

so that we may live in freedom and grace with you. Amen.