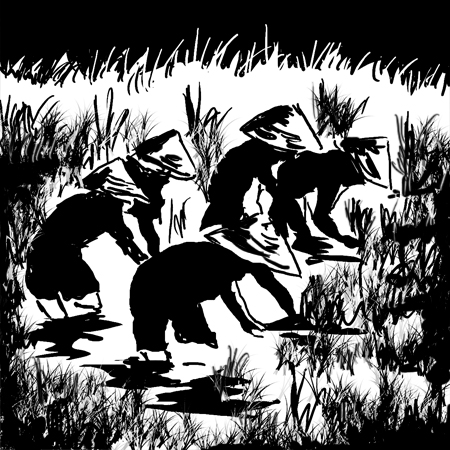 A disciple is a student or a follower of a particular teacher to learn about a certain subject like religion, literature, martial exercises or a profession. In the Old Testament, those followers of the Jewish rabbi were called disciples. In the New Testament, those followers of Jesus’ teaching were also called disciples. The term disciple was mentioned 250 times [1] in the New Testament. Among the disciples of Jesus, there were twelve close followers called apostles (Mt 12:2-4; Mk 3:16-19; Lk 6:13-16; Acts 1:13).

The gospel of today tells us: Jesus appointed seventy-two others whom he sent ahead of him in pairs to every town and place he intended to visit (Mk 10:1). He instructed them: Carry no moneybag, no sack, and no sandals and greet no one along the way (Mk 10:4). If we interpret Jesus’ instructions literally, then most of the modern missionaries are missing the point, because they might carry two or three suitcases of clothes and belongings, with money and even a visa or a master card.

Jesus’ instructions in today’s gospel are also different from the instructions recorded in the gospels of Matthew and Luke concerning missionaries’ belongings (Mt 10:5:15; Mk 6:8-12). The reason for the differences in carrying baggage may be due to the differences in the evangelist’s emphasis on different points in the teachings of Jesus. Thus, this evangelist might have emphasized this point. That evangelist might have done that point. This point tells us it is not necessary to interpret Jesus’ instructions literally. Therefore, we need scripture scholars to help us understand Jesus’ instructions on how to travel on missionary journeys. We also rely on the church to interpret the scripture because the Church was entrusted with the mission of safeguarding God’s word from being misinterpreted. Thus, details of what to bring for missionary journeys are not as important as the message of the Gospel.

In a stricter sense of the word, the clergy are considered as the laborers, but in a broader sense of the word, every Christian must be a laborer of God's harvest. Through baptism, we are called to faith. Through confirmation, we are called to bear witness to the life of faith. The life of a Christian must be a reflection of faith and witness to his/her faith. Jesus’ word today tells us about the urgency of the apostolic work: The harvest is abundant, but the laborers are few; so ask the master of the harvest to send out laborers for the harvest (Lk 10:2).

A prayer for knowing how to do lay apostolic works:

Grant that we may be aware that through baptism

we are called to ‘share in the priestly, prophetic and royal office of Christ’ [2]

With the ordained ministers, we do apostolic works,

and offer to God the gift of thanks, sacrifice and atonement of sins

for ourselves and for the humankind. Amen.