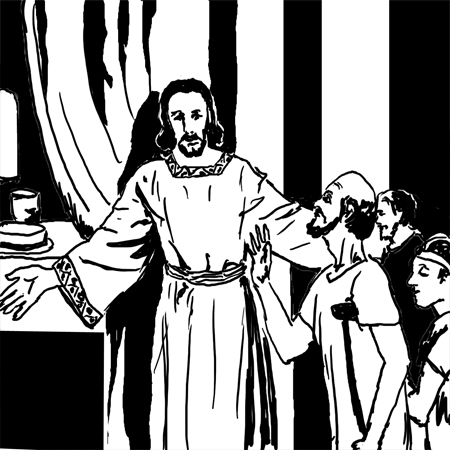 Among the people of near eastern culture like the Jews at the time of Jesus, seating at a place of honor was important. At a banquet, they were arranged according to a person’s position of status. Today’s gospel tells us a certain leading Pharisee invited Jesus to his home for dinner. The majority of the guests to the dinner ought to be Pharisees because the leading Pharisee hosted the dinner. According to the gospel, the Pharisees were observing Jesus carefully (Lk 14:1). Why did they observe Jesus carefully? We can assume that they did so in order to find out how and where Jesus was going to sit at the table.

Watching the guests looking for places of honor, Jesus then told them a parable: When you are invited by someone to a wedding banquet, do not recline at table in the place of honor (Lk 14:8), lest you might be asked to make room for some greater guest. In our time, seating position at the banquet is no longer a big deal, especially in a democratic society. However, we might use different tricks like boasting of ourselves to exalt ourselves or criticizing others to put them down.

In today’s Gospel, Jesus teaches us the lesson of humility. Humility is a virtue to express and accept the truth about ourselves, to accept what we have: our potential and limitation, neither self-deprecating, nor self-adulating. Somebody put it another way: Humility and self-knowledge go hand in hand. Only when we know ourselves, can we be humble. A humble person recognizes his dependence on God’s grace and his power. He/she directs his/her work toward the glory of God and the salvation of souls. He/she seeks to find favor with God (Sir 3:18) and to glorify God (v. 19).

It might be false humility when we pretend we are useless and nothing. The humble person appreciates his/her talents God gave him/her and recognizes the wonderful things God has done in his/her life. That is what the Virgin Mary did, by recognizing the great things God has done in her life without losing her humility. At the time prior to Jesus’ birth, many Jewish women dreamed of the motherly role of the Messiah. As for Mary, she only accepted the motherly role when the angel announced to her that she would conceive and bear a son miraculously. Her humility, her openness to the word of God and the will of God brought her to greatness. God saw her humility and chose her to be the mother of his Son incarnate. In the canticle Magnificat, Mary acknowledged the great things God had done in her because he looked upon her in her lowliness. The Canticle of Mary has been a theme for many people to meditate and contemplate. It has been the source of inspiration and consolation for so many people especially the humble of heart even though they are highly educated and the poor in spirit even though they are wealthy.

Jesus came to turn our human values upside down. In today’s gospel, Jesus teaches us: For everyone exalts himself will be humbled, but the one who humbles himself will be exalted (Lk 14:11). The fallen angels were banished from heaven because of their sin of pride and conceit, wanting to challenge God (Rev 12:7-9). Adam and Eve were driven out the Garden of Eden because of their sin of self-glorification, wanting to be like gods (Gen 3). Pride and conceit is a dead end road. It leads us to nowhere. It can be devastating and destructive.

Have we ever been boastful, claiming to be what we are not? Then at night when we were lying on bed, unable to sleep yet, and we felt empty inside? We felt ashamed of ourselves. To be ashamed of self is a first step to fight the sin of pride and boastfulness. To learn the virtue of humility, let us come to Jesus and ask him to teach us how to be humble. Jesus is God, yet humbled himself to take our human nature and to be born among us and he invites us to come and learn from him, for he is gentle and humble of heart (Mt 11:24). Then Jesus teaches us a lesson of altruism, instead of seeking repayment, telling his disciples: When you hold a banquet, invite the poor, the crippled, the lame and the blind; blessed indeed will you be because of their inability to repay you (Lk 14:14).

A prayer asking God for a lesson of humility:

For love of sinful humankind, you humbled yourself

taking our human nature to save the humankind.

Forgive us for the times we were selfish

by choosing the best portion and seat of honor at table.

Teach us to forget ourselves in our service of others

so that your name may be honored. Amen.