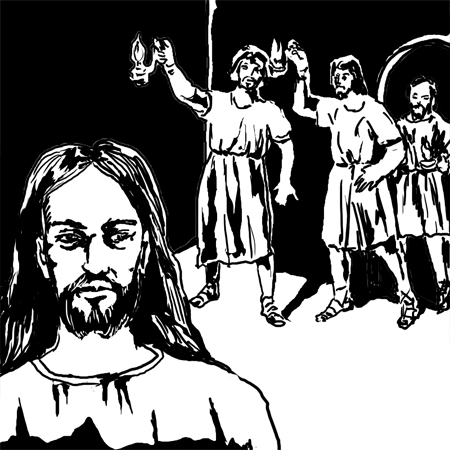 In today’s gospel, Jesus called us to be vigilant and prepared for his return. When the master of the house went away, the wise servant prepared for his coming (Lk 12:36-38). As for the servant who was not vigilant on his arrival, would be caught up unprepared (v. 45-46).

Jesus told his disciples: You also must be prepared, for at an hour, you do not expect, the Son of Man will come (Lk 12:40). In the Old Testament, God’s deliverance of his people from the Egyptian slavery occurred suddenly (Gen 18:7). Anyone who was a scout would understand the meaning of the Scout motto: Be prepared. When admonishing the disciples to wait for the coming of the Lord, Jesus wanted us to be watchful and pray, to be vigilant against temptation and avoid any occasion of sin. This practice of vigilance and preparation should help build up our spiritual strength as to fight temptation. Watchfulness means faithfulness in keeping God’s commandments and living according to his way. That was an example of our father Abraham who was faithful to God’s promise in spite of trials contrary to God’s promise (Heb 11:8, 11, 17). To enhance the importance of vigilance and preparation, Jesus gives us an example that no one knows when the thief would be coming to rob his house (v. 39).

The parable about the coming of the master refers to either one’s individual death and judgment, or the end of the world. We do not know when we will leave this world and how we will depart from this life. Nobody knows when the angel of the Lord will come to knock at the door of his/her soul. If we think death is the end, then we need not be vigilant and prepared for it when it comes. The implication of the gospel is we must give an account to God on our lives. If we are wise, we will make peace with God while there is still time to do so. Therefore, we cannot afford to be indifferent and complacent.

He who thinks that he/she has enough time to prepare and to settle accounts with God would deceive himself/herself. If we think death is an end, then there is no need for preparedness. The reason for preparedness is because Jesus taught us death is not an end, but followed by a judgment and we believe so. When we see Jesus as the Good shepherd, we think about his care, his mercy and kindness, and love and forgiveness.

However, to think only of his love, kindness, and forgiveness, is to see things one-sided and partial. Jesus also came to judge. He judges based on whether we listen to God’s word and keep his commandments. Each one of us, eventually, will face death, a time we have to come before God’s tribunal. In our society, we seldom have occasion to think about death.

When somebody dies, a funeral home handles almost everything, preparing the body for viewing and burial. Besides a tombstone, we have nothing to remind us of the death of our loved one – not even a picture taken of the deceased or his /her funeral. Influenced by society and culture, we are trying to protect ourselves from all the sadness and suffering caused by death. Perhaps nobody wants to think of death.

We think death occurs to someone else, and not to us. However, death is a secret. Death can occur to anybody at any time and in any place. Each minute about two hundred people die in the world. In our life, we often hear people say: someday I will reconcile myself with God, making peace with him through the sacrament of penance, and begin a new life and practice my faith faithfully.

However, that day might never come because a person might have been gone for good. Therefore, God wants us to live the presence in faith and grace and in favor with Him.

Today each one of us needs to ask himself/herself these questions:

Prayer for watchfulness and preparation:

Oh Lord our God whom we adore!

When are you coming to make your last visit

to my life on earth?

Teach me how to be watchful,

preparing for your last visit

so that I may be ready to welcome you

into my life. Amen.