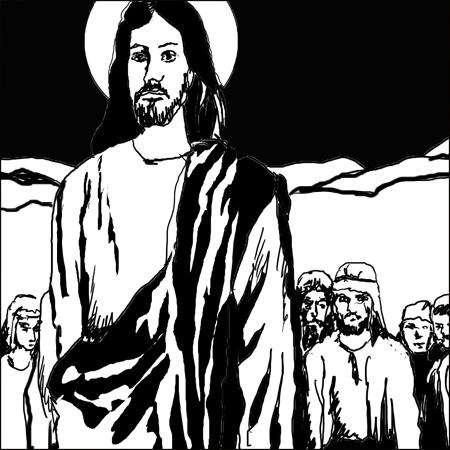 2 Sunday of the Year A

One of the major problems, which psychologists, counselors and spiritual directors have to deal with in our days is the problem of lost identity or lack of identity. There are different kinds of identity such as individual identity, sexual identity, family identity, cultural identity, identity of religion and so on. In a foreign country, if we lose our passport, we shall become nobody. Even in our own country, if we lose our identity card such as a driver's license or a social security card, we shall have a hard time to identify ourselves before a police officer, a possible employer or a medical doctor.

At the time just before the birth of Christ, the Jews expected a messiah would come to liberate them from the Roman occupation. They hoped the messiah would come to set up an earthly kingdom in Palestine with a mighty army, rich and strong, capable of overthrowing the Roman rule and making their country number one. Of course, these were their wrong notions about the messiah and his religion.

In today’s gospel, John the Baptist tried to correct these wrong ideas about the messiah and his religion. John identified Jesus as the Lamb of God: Behold, the Lamb of God, who takes away the sins of the world (Jn 1:29). In the Old Testament, lambs were used as sacrificial offering to God. By calling Jesus the Lamb of God, John showed us that Jesus’ life was offered to God as the sacrifice for the remission of sins of humankind. Testifying to Jesus’ mission, John also testified his own mission when he appeared preaching the message of repentance. John was revered and regarded as a messiah himself.

At that time in Palestine, people were tired of the Roman occupation and immorality in their nation. Therefore, they expected a messiah to come more than ever. Thus, if John the Baptist wanted to deceive people by claiming to be a messiah, people would believe so, because his message of preaching was so powerful and appealing. John did not mistake his identity, not claiming to be what he was not, but playing his role appropriately. He considered himself only as a voice in the desert, making straight the way of the Lord (Jn 1:23), and not worthy to carry his sandals (Jn 1:27). Saint Paul in his letter to the Corinthians also gives us our identity as we are sanctified in Christ Jesus to be holy (1Cor 1:2).

Living in our pluralistic society and our changing world, it is easy for us to lose our Catholic identity. We can mistake the identity of religion and the identity of the Church. We can be influenced by what we read in newspapers and magazines, what we hear from radios and see in television, and even in internet. When secular journalists write commentaries on religious issues, they tend to write from a secular point of view. Since they do not understand the essence of religion and the mission of the Church, they tend to give comments on one aspect of the whole picture. For them, religious truth is a matter of opinion taken from pollsters, rather than something revealed from above.

There are certain terminologies a number of Catholics used do not express a sense of Catholic identity either. Did we ever ask a certain Catholic priest such as: What service do you have today, or how many services do you have today? Do we have a sacrament of reconciliation today? Actually, there is no such thing as the sacrament of reconciliation. There is only a rite of reconciliation. As for sacrament, it is to be called the sacrament of penance. For us mature Catholics, we can tell what is right and wrong and what is correct or incorrect. However, for young children, they can be misled and deceived easily by the mass media. If we think our children's minds have been poisoned by what they had read or seen in the mass media, we have to help disinfect it and intoxicate it from theirs.

The lesson John the Baptist teaches us today is the lesson of self-identity, the identity of God and of religion. The lesson we can learn from John is to accept our position, our standing and our limitation, good points and bad, not faking, not attributing to ourselves what we do not have and did not do. Did we ever feel empty inside ourselves at night, finding it difficult to sleep, after we had been boastful of what we did not have and did not do? To feel empty inside ourselves is a first step for an inner conversion.

The sense of our Catholic identity is important for us and for others in dealing with us. It helps us know our stand. As Christians, we are concerned with who we are, what is to become of us, what we are to believe and to do, and why we have been born into this world.

Prayer for knowing who we are and what our religion is:

Oh Lord God! You know everything,

you know my heart.

Grant that I may know myself:

my substance, my stand, my role and my limitation,

along with my good points and bad.

May I be true to myself

so that I may live in peace and joy. Amen.