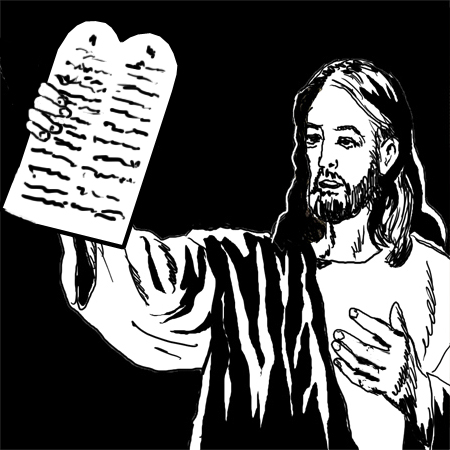 6 Sunday of the Year A

In the ancient times when there was no written word, each nation lived according to different sets of tradition, handed down from one generation to another, determining ways of behavior in a tribe and society. When sets of tradition were not kept, contradiction would occur. Until man discovered writing system, those sets of tradition were recorded in laws. Laws could be simple or complicated depending on degrees of advancement in each society in different aspects of culture, economy, science and social services. In those progressive societies, laws can cover every aspect of life such as freedom of worship and traffic laws. The purpose of promulgating laws is not to restrain, but to liberate people, to civilize humankind and to safeguard the human dignity.

If a nation has no law or does not enforce laws properly, one or the other following situations will occur. Either people might choose to live according to a law inscribed in their heart by the creator, meaning to live according to the law of the right conscience. Or they might live according to the law of the jungle. When the jungle law is carried out, cruelties, disasters and damages will fall on the defenseless. By observation, one can see when an organization or a nation has no law, or does not enforce law and its citizens do not live by the law, disorder and state of chaos will occur in society. God’s law given is aimed to direct and advance the human life. God gives the law to the human being and also gives freedom to choose. That freedom to choose has been recorded in the book of Sirach: If you choose, you can keep the commandments (Sir 15:15). If man keeps God’s commandments, God promises to give him wisdom. That is a wisdom which Saint Paul in his first letter to the Corinthians contradicts with wisdom of this age (1Cor 2:6).

Reading the Gospel of today, we have the impression that Jesus came to give a new law, stricter and more complicated than the old. However, Jesus came not to abolish the old law and to give a new law. He came to fulfill the law, to give man a new sense of righteousness in interpreting the law. And he wants us to live the spirit of the law rather to observe the external law. To fulfill the law means to go beyond the law. To go beyond the law does not mean to abolish it, but to find meaning and purpose of keeping the law. If the purpose of having laws is to serve man, then when the right to life is threatening, then man can violate it. Jesus himself violated the letter of the law of Moses a few times when he cured sick persons on the Sabbath and when he ignored his apostles who pulled heads of grain and ate them (Mk 2:23).

Therefore, he was considered a reactionary, coming to overturn those traditions of their ancestors. However, that violation of the letter of the law can still fulfill the law, since the purpose of having the law is not to oppress people, but to safeguard and liberate people from living according to instinct and the jungle law. To talk about violating the law, we have to make a distinction between God’s law and the human law. For God’s law, nobody can abolish it. Therefore, when the human law is contrary to God’s law, the faithful must express their position according to the voice of conscience.

To attain it, Jesus told them to watch and control their eyes, ears and tongues. The second commandment forbids false swearing. Jesus told them not to swear at all, but to say what it’s meant. Even to bear true swearing also offends God. Also in today’s Gospel, Jesus tells us: Unless your holiness surpasses that of the scribes and Pharisees, you shall not enter the kingdom of God (Mt 5:20).

The scribes and Pharisees at the time of Jesus distinguished 613 precepts to interpret God’s commandments. These precepts were very wordy and sometimes blurred God’s commandments. Jesus often scolded the scribes and Pharisees, calling them hypocrites because they followed the external observation of the law, and their hearts were far away from him.

If the scribes and Pharisees in the Old Testament distorted the meaning of religion, by keeping the external observation of the law, then the faithful of today can also keep the minimum requirements of religion nominally. After the second Vatican Council, the church laws have been simplified. That makes people think the practice of faith has been lax. In reality, the changes of Vatican II were to encourage Catholic people to take initiative to put their faith into practice, to do more voluntary fasting, abstinence, sacrifices and works of charity.

Oh God, you are God of all wisdom and knowledge.

You gave humankind your Ten Commandments.

May the civil laws reflect your laws

since all laws come from you.

Teach me to keep the law of justice in society

so as to maintain public order and interest. Amen.