2 Sun. / Easter A: Believing is to trust those trustworthy 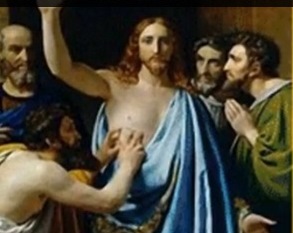 2 Sunday of Easter, Year A

When Mary of Magdala and the women went back to tell the apostles about the empty tomb and the appearance of the angels who told them to carry the good news to the apostles, they thought it was the product of women’s imagination (Mk 16:11; Lk 24:11). Possibly, the apostles were influenced by the Jewish law at that time, not accepting the witnesses of women in court. That was why they did not take the women’s report on Jesus’ resurrection seriously in their community of discipleship. John was the only one who believed that his master had risen when he saw the empty tomb and the head cloth rolled up lying separately from the wrappings.

When they were praying in their locked room for fear of the Jews, Jesus appeared to them and said: Peace be with you (Jn 20:19). This time Thomas was absent. When the Apostles told Thomas about their master’s appearance to them, he refused to believe. He demanded to see the Lord, to hear his voice, to touch the nail marks on his body, before he could believe in his resurrection. Thomas was a practical and pragmatic man. Once Jesus said he would go and prepare a place for them, Thomas questioned Jesus that they would not know where he would be going. So how could they know the way (Jn 14:5)? We might blame Thomas for his persistent unbelief of Christ's resurrection.

However, Thomas doubted on this one occasion only. After Jesus had personally appeared to him, Thomas made his profession of faith personally, firmly and resolutely: My Lord and my God (Jn 20:28). His profession of faith was worthy to be an example and to be repeated hundreds, thousands of times for those who are doubtful about Jesus’ resurrection.

In our times of experimental science and technology, people want to verify all hypotheses. However, faith is not a science. Faith is a gift from God. Faith is not something we can hold fast in our hands, put in a deposit box in the bank, or bury in the ground. It is something that we have to find ways to maintain. Since faith is a gift from God, we do not need to rely on reason to understand what we believe, because faith and understanding are on two different levels.

In the Jewish court at that time, women could not act as witnesses. Thus, the witness of Mary of Magdala was invalid. In any time, people consider one witness as no witness: Testis unus, testis nullus. In this case, there were eleven apostles as witnesses and two more witnesses of the two disciples on the road to Emmaus (Lk 24:35). The ten apostles accepted death to bear witness to their master’s resurrection.

Yet, to believe in God does not mean that there is no more problem of life. Thus, we can see people with strong faith, but still face difficulties in life: diseases and sufferings in body and mind, spirit and soul. Faith should help us face illnesses, diseases and difficulties in daily life. Faith has entered our lives gradually. With daily observation, we realize God leads us step-by-step and day-by-day through different paths of life from infancy through adulthood, to old age, sometimes it’s smooth, other times it is rough.

Today is the Divine Mercy Sunday. In 1931, Jesus appeared to Saint Faustina Kowalska, a Polish nun, telling her to spread devotion to his divine mercy. Jesus further asked that a Novena to the Divine Mercy be made beginning on Good Friday. On each day of the novena, the Divine Mercy chaplet is prayed on ordinary rosary beads. A prayer to the Divine Mercy is repeated like Hail Mary: For the sake of His Sorrowful Passion, have mercy on us and on the whole world.

A prayer of the first day of the Divine Mercy Novena Chaplet: [1]

Most Merciful Jesus, whose very nature it is to have compassion on us

and to forgive us, do not look upon our sins but upon our trust

which we place in Your infinite goodness.

Receive us all into the abode of Your Most Compassionate Heart,

and never let us escape from it.

We beg this of you by Your love which unites You

to the Father and the Holy Spirit.

Eternal Father, turn Your merciful gaze upon all mankind

and especially poor sinners, all enfolded

in the Most Compassionate Heart of Jesus.

For the sake of His sorrowful Passion show us Your mercy,

that we may praise the omnipotence of your mercy for ever and ever. Amen.