4 Sun. / Easter, A: Asking to remain in the sheepfold 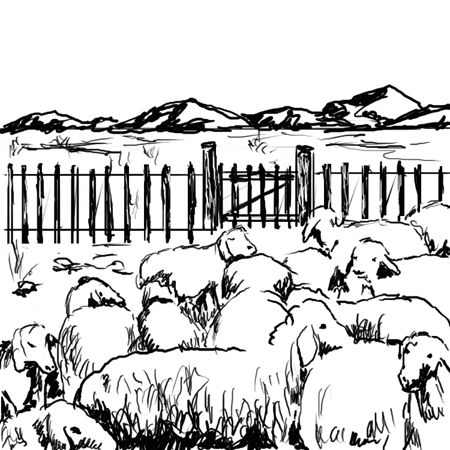 4 Sunday of Easter, Year A

The Jews of the Old Testament were a pastoral people. Their literature, that is the Old Testament books, often mentioned pastoral images like sheep, goat, shepherd, wheat and weeds, sparrow, mustard seed, vine, grape and vine grower. Shepherding in the ancient times was a hard work. Sheep needed a shepherd’s care taking and protection. First, a shepherd had to know his sheep: which one belonged to his flock; which one was sick; which one was missing. Then, a shepherd had to feed his sheep. He had to lead them to streams of water to drink, to a meadow to graze and to keep them from poisonous weeds. Finally, a shepherd had to protect his sheep from the dangers of wolves and dangerous cliffs.

At the time of Jesus, sheep were useful for family economy. The sheep furnished milk, butter and cheese. Sheep hair furnished wool clothing. Sheep were used as animal sacrifice in the Old Testament. Sheep was Jesus’ favorite animal. Jesus considered himself as a lamb, coming to be a sacrificial offering as a ransom for the sins of humankind. For practical application, to commemorate the Jewish Passover meal in the Old Testament, chosen to be the background of Jesus’ Last Supper with his apostles in the New Testament, the faithful might want to eat lamb meat on Holy Thursday. Lamb roasted in the oven or grilled on a charcoal fire served with mint sauce provides a good meal.

However, sheep are meek, weak and slow, vulnerable to attack by other animals. The sheep have no horns and tusks to attack; no pointed canine teeth and fangs to bite; no sharp claws to catch and seize. When attacked, the sheep cannot back-kick like a buffalo or horse because of their short and weak legs. They cannot run fast like a rabbit, or jump to a tree branch like a monkey to escape. Besides, sheep cry like a baby: be-e-e, not frightening at all to other animals. They speak the same language everywhere, not like people.

In the Gospel today, Jesus calls himself shepherd of the sheep. He also calls himself the gate of the sheepfold, saying: I am the sheep-gate. All who came before me were thieves and marauders whom the sheep did not heed (Jn 10:7- 8). The books of the prophets Isaiah, Jeremiah, Ezekiel, Hosea and Micah identify the false prophets as thieves and robbers. Thus, to enter through the sheep-gate is to enter through the Church, through the organizational and hierarchic structure of the Church. As the sheep need to stay in the sheepfold in order to be protected from wolves, the faithful also need to stay in the Church as to be protected and nourished by the Word of God and the Body of Christ.

Jesus appointed the apostles to be pastors to take care of the pastoral needs of his faithful. Even though the apostles and their successors as well as collaborators were those, who still carried within them weakness and sinfulness, Jesus promised to be with the Church until the end of times (Mt 28:20). Jesus founded the Church under the guidance of the Holy Spirit so that the teaching of the Church may be reflected by the truth. The purpose of founding the Church was to maintain the communion of faith and the unity of Christians. If not, it would be like what Jesus said: They were like sheep without a shepherd (Mt 9:36).

Christ's Church is a pilgrim church. A pilgrim church means a constantly self-renewing church, finding new ways to cope with new problems and new challenges, purifying it from abuses and imperfections and seeking always the truth. Throughout the history of the Church, the Church has gone through different periods of history: sometimes it was up; sometimes it was down; sometimes it had a golden period; other times it had dark days due to weaknesses and abuses by individual members. Since the foundation of the Church, anti-Catholic forces always took advantage of weak points in the Church to attack the Church. Happily, Jesus guaranteed Peter: On this rock, I will be my church and the jaws of death shall not prevail against it (Mt 16:18).

A prayer asking to stay in the sheepfold:

We thank you for having founded the church as the sheepfold.

Protect those whom you appointed shepherds,

to take care of the sheep.

Keep them from personal ambition and disobedience,

lest they disperse sheep through bleach of rules

or to take sheep out of your sheepfold.

Grant that I may recognize your voice

and remain in the sheepfold as to be protected and nourished

with your word and the Eucharist and the official teaching of the Church,

which you founded on the rock of Peter: