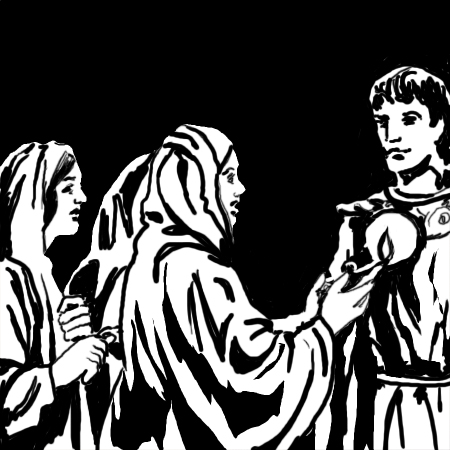 Many different images of the kingdom of God, or the reign of God, or kingdom of heaven were used by Jesus to teach his contemporaries. The kingdom of God was likened and explained in different parables. They were the parable of the weeds, the mustard seed, the leaven, the hidden treasure and the pearl, the net, the unforgiving servant, the workers in the vineyard, the two sons, the tenants and the wedding feast.

Today the kingdom of heaven is likened to ten virgins who took their lamps and went out to meet the bridegroom, of whom five were wise and five foolish. The foolish virgins took their lamps with no extra oil. The five wise virgins prepared their lamps with oil reserved (Mt 25:3-4). According to Jewish historians, a wedding ceremony at the time of Jesus began at sunset when a new day began and they celebrated with lavish banquet lasting for days. However, this wedding was delayed because the marital agreement concerning betrothal gifts and dowry was not solved between the two families until midnight.

A lamp without oil is useless. In a figurative sense, the soul without God’s grace is the lifeless and stunted soul. We may blame the wise virgins for their selfishness for not sharing some of their oil with the foolish ones so that they all could enter the wedding banquet. However, how much oil needed to light up the lamp for the wedding depends on each person’s planning. The oil we need to attend the heavenly banquet is the grace of God. We can remind others to prepare spiritually for the heavenly banquet, but cannot do it for them. Wisdom in the biblical sense is related to belief in Yahweh. According to the book of Proverbs, wisdom is ultimately a gift of Yahweh (Prv 2:6).Accordingly, the book of Proverbs teaches: The fear of the Lord is the beginning of wisdom (Prv 1:7; 9:10; 15:33; Jb 28:28).

The Gospel tells us about the wisdom of the Child Jesus as follows: Jesus, for his part, progressed steadily in wisdom (Lk 2:52). Later on, his acquaintances remarked: Where did this man get such wisdom and miraculous powers (Mt 13:54)? They realized that he was only the son of the carpenter and the housekeeper among themselves (Mt 13:55) and he did not attend a rabbinical school. The Book of wisdom today values wisdom as a guarantee for the heavenly happiness: For taking thought  of wisdom is the perfection of prudence and whoever for her sake keeps vigil, shall quickly be free from care (Wis 6:15). Wisdom tells the five wise virgins to bring extra oil for their lamps. Wisdom is also mentioned in his letter to the Thessalonians. Saint Paul told them to believe in Jesus’ death and resurrection and his power to resurrect those, who passed away in faith: For if we believe that Jesus died and rose, so too will God, through Jesus, will bring forth with him from the dead those also who have fallen asleep believing in him (1Thes 4:14).

In Vietnam of the old times, virginity was valued for a young girl before marriage. As a result, a motto was circulated: You can be wise for three years, but stupid for one hour. Due to being stupid for one hour, her marriage was annulled and the possibility for her to marry again would be dim. In a similar way, in order to attend the heavenly banquet, one must be careful and watchful for one’s spiritual life, lest there would be no time and occasion to learn wisdom. The wedding banquet stands for the heavenly banquet when the faithful are called out of this life. The ten virgins stand for the whole people of God: clergy, religious and laity, men and women, old, young and children.

If we want to be listed with the wise virgins, we must be prepared spiritually, waiting for the angel of the Lord to call us from this world and stand before the judgment throne. However, nobody knows the day or hour of God’s call. Nobody knows when disease, accident, natural disaster will come. The coming of the groom at midnight hour conveys the unpredictability concerning the time of the Lord's coming. God does not give us an appointment to come into our lives. To wait until the last minute for purchasing oil for their lamps was too late for the foolish virgins. It would be too late for us to wait until the last minute to give an account to God. To plan to do something at the last minute in order to get ourselves into spiritual shape is not to be recommended. It is to be avoided. We might have heard people say that day they would make a confession and amend their lives. Unfortunately, that day might never come for they might have gone before that day. So while waiting for a day to attend the heavenly banquet – the day of judgment – we need to be vigilant and ready to light the lamp of our soul, to live in right relationship with God.

A prayer for being listed with the wise virgins:

h Lord, our God! You are all-wise and all-knowing.

As the five wise virgins prepared oil for their lamps,

teach me to be vigilant and anticipatory

ready to prepare myself spiritually

lest when I am called out of this world suddenly

and my soul has no oil of grace in you.

Grant that I may be listed with

the five wise virgins to enter the wedding banquet. Amen.