Epiphany, B: Jesus has come to disturb people 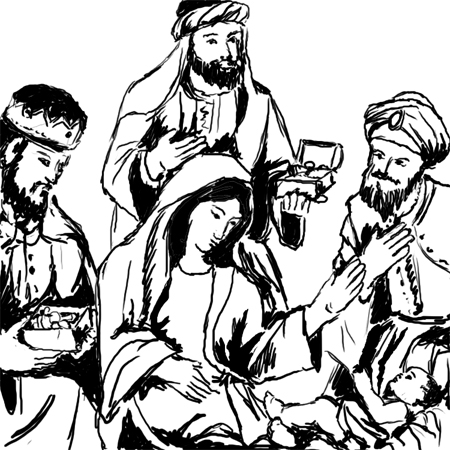 The Epiphany of the Lord, Year B

It was published in Vietnamese in the US 2008 and republished in Viet Nam 2011. To keep the author’s writing style, this homily has not been edited and may not be by a hired hand. However, if readers would like to point out mistake(s) in spelling and grammar and to suggest English phrases and expressions, it would be greatly appreciated by the author, whose English is not his mother tongue and who did not live in the US until his adulthood. Passive sentences are used intentionally in this context to avoid using the first personal pronoun ‘I’ when applicable, that might be associated with any idea of egotism, in accord with the French saying, known as: ‘Le moi est haissable’ (The ego is detestable).

At the time just before the coming of the messiah, people hoped the messiah would come as a political leader, a social reformer and a first class military general, capable of overthrowing the Roman rule from their nation so that they could raise their head among their neighbors. Therefore, when the astrologers came to meet King Herod to find out: Where is the newborn king of the Jews (Mt 2:2), King Herod understood it in a political sense. Herod was made king of the Jews as a favor of the Romans. Therefore, he considered the news announced by the three astrologers about the messiah as perplexed news. He began plotting to kill all children of Bethlehem and the environs two years old and under (Mt 2:16).

Since the time of his birth, Jesus has been disturbing people. In the Gospel of Luke, Jesus made a very perplexed statement that disturbed people, saying: Do you think I have come to establish peace on the earth? I assure you, the contrary is true. I have come for division (Lk 12:51). So is it a contradiction in his mission and his Gospel? At his birth, the angels sang: Glory to God in high heaven, peace on earth to those on whom his favor rests (Lk 2:14).

In the Gospel, he promised to bring peace (Jn 14:27; Jn 20:19). So why did he say he came to bring division? To follow Jesus has brought martyrdom to hundred thousands of people all over the world. Until now, Christians are still being persecuted in some parts of the world. His teaching still disturbs people. When doing something wrong and our mind has been disturbed, we might call upon a kind of collective conscience to pacify us. For instance, when we see others doing something wrong, we might rely on them to continue our wrongdoing. Other times, we might try to suppress our conscience in order to continue doing sinful things. We might find ways to defend our sinful acts by criticizing the church, considering the church as conservative, not in tune with progressive ideas and present culture. We might also start this group or that group to advocate our agenda and our ways of life.

Thus, only when we accept the way of the Gospel, only when we consider Jesus as the most important person in our lives, and only when we allow him to be in charge of our lives and to be our heritage, can we experience his peace. When we surrender ourselves to God and let ourselves submitted to the divine will and supernatural power, real peace will come to us.

Those who hear about the coming of the Messiah are joyful and happy. That was the prospect, which the prophet Isaiah envisioned: Then you shall be radiant at what you see, your heart shall throb and overflow (Is 60:5). That was the reaction which Saint Paul saw fulfilled: That the Gentiles are coheirs, members of the same body, and copartners in the promise in Christ Jesus through the gospel (Eph 3:6). They were those who realized in order to come to Jesus, they had to broaden their eyes, ears, minds and hearts. They were shepherds who came to worship the Infant Jesus at the manger (Lk 2:15-16). They were astrologers, popularly known as three Kings, left their home to come and worship the newborn King. When they found him, they prostrated themselves to offer him gold, frankincense and myrrh to express their reverence and admiration (Mt 2:11).

Among them was a wealthy tax collector, named Zacchaeus, who was happy to welcome Jesus to his home. He promised to distribute half of his property to the poor and to return fourfold to anyone whom he might have defrauded due to his unjust taxation (Lk 19:1-10). Among them was a sinful woman, decided to turn away from her sinful past with her tears, flowing out to wet Jesus’ feet, then used her hair to dry them out (Lk 7:36-50).

Also among them was a thief, crucified at Jesus’ side, repented his sin and asked Jesus to have mercy on him at his return to his kingdom (Lk 23:42). Reading the scripture and Jesus’ teaching, we can see his religion is not an all yes religion. When we read the bible or listen to his teaching or a sermon that makes us think, that is the first step for awakening our soul and changing our life.

To follow Jesus, we must be ready to pay a certain price for being his disciple. We have to reorder a priority for our lives. For us Christians, material values must give way to the human and the human to the divine. Only then, we can understand the meaning of peace, which Jesus promised: Peace is my farewell to you. My peace is my gift to you. I do not give it to you as the world gives peace (Jn 14:27).

A prayer for recognizing God’s presence:

O Lord our God, you came to reveal to humankind

your presence, your power and your teaching.

May those who are seeking the truth sincerely,

seeking one who is the all high and powerful

with their sincere and humble of heart,

that they may be able to find you.

May I renew my belief

in the one God, all-powerful and true. Amen.