2 Sun. / Ord. B: Responding and living one's vocation each day 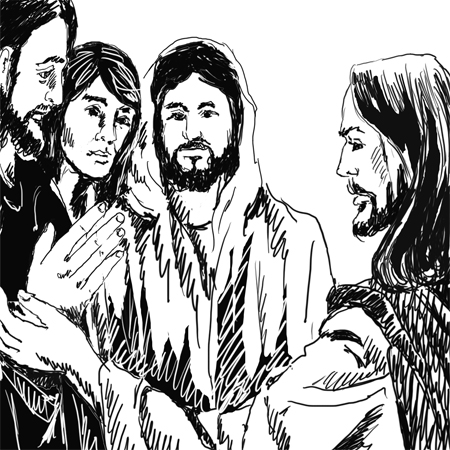 2 Sunday of the Year B

Watching Jesus walk by, John the Baptist introduced Him to two of his disciples: Behold, the Lamb of God (Jn 1: 36). One of the two disciples of John was identified by the name Andrew; the other’s name was concealed. However, scripture scholars guessed it was John the apostle because John had a tendency to conceal his identity.

He concealed his identity on two other occasions when he wrote: The disciple whom Jesus loved (Jn 13:23; Jn 19:26-27; Jn 20:2; Jn 21:7) and when he reported: The other disciple outran Peter and reached the tomb first (Jn 20:3-4; Jn 20:8). Today the two disciples accepted Jesus' invitation: Come and see (Jn 1:39). Therefore, they went to see his lodging and decided to stay with Him and follow Him. John the Baptist did not question his disciples' defection, when they followed Jesus, because he had maintained Jesus must increase while he must decrease (Jn 3:30). Finding out where Jesus was staying, Andrew introduced his brother Simon to Jesus. Then Jesus changed his name to Peter, which means Rock.

Jesus gave him this name because he knew beforehand that he would make him leader of the apostles and head of his Church. They followed Jesus not because he lived in a big and comfortable house. In his life of obscurity for thirty years, Jesus lived in the Holy Family’s house at Nazareth. In his public life, the Gospel only mentioned that Jesus stayed overnight at the house of Zacchaeus (Lk 19:5) and at other times, he rested overnight at the house of Marta, Mary and Lazarus (Lk 10:38; Jn 12:2). On other occasions, we can assume for rather sure that Jesus and his apostles were on the move here and there. He could set up a tent to protect himself from the rain and the sun, taking it with him when he moved. His homeless way of life was confirmed when somebody in the Gospel wanted to follow him, he responded: The foxes have lairs, the birds in the sky have nests, but the Son of Man has nowhere to lay his head (Mt 8:20; Lk 9:58).

To follow Jesus in this situation and circumstance must have been risky for the sake of the Kingdom of heaven. Turning to the first reading, we have a story of how God called Samuel to fulfill his mission to lead his people. Samuel responded: Speak Lord, for your servant is listening (1Sm 3:10).

Thus, the laity, either married or single is called to do the lay apostolic work by prayers, examples and services depending on their abilities, opportunities and circumstances in life. According to Saint Paul, there are different members and roles in the church as to build the Mystical Body of Christ (1Cr 12:12-34).

The Second Vatican Council in its Decree on the Apostolate of the Laity calls upon the laity to do apostolic work in the family, society, on the national and international levels, states: There are innumerable opportunities open to the laity for the exercise of their apostolate of evangelization. The very testimony of their Christian life and good works done in a supernatural spirit have the power to draw men to belief and to God (Apostolicam Actuositatem # 6).

We may wonder if there is one vocation more desirable and noble than the other. There is a Vietnamese saying: Dedicated life is happiness, married life is misfortune. That saying is not quite right. If the priesthood or religious life is not fulfilled, then it is not necessarily happy. What’s important thing is each person fulfills his/her vocation. In a play, if a main actor performs badly, the whole play loses its value.

Married life is the same way. Married life does not stop on the wedding day or the honeymoon. Married love and life must grow and be fostered day after day, year after year. A Christian vocation does not stop at the day of baptism and confirmation either. A certificate of baptism is not an ID or a passport to enter the kingdom of heaven, if Christians do not keep God's commandments, and do not practice the teaching of Christ. Each Christian needs to study the gospel message as to build up his/her relationship with God and to practice and renew his/her faith. That is the process of discipleship. Each baptized Christian including priests and religious brothers and sisters is called to be Jesus' disciple.

Our response to God’s call is not one time response. Each day requires us to renew our response. To accept discipleship or not depends on each one of us. Our nature is weak, but when God invites us to be somebody or to do something, he will give sufficient grace to fulfill our calling.

A prayer for responding and living one’s vocation each day:

Oh Lord, our God! You call each one of us

to be somebody and to do something

for your service and the service of humankind.

Grant that those who are in a road junction

and do not know which way to go

that they may know and respond to your call.

Give me the grace so that I may fulfill my calling. Amen.