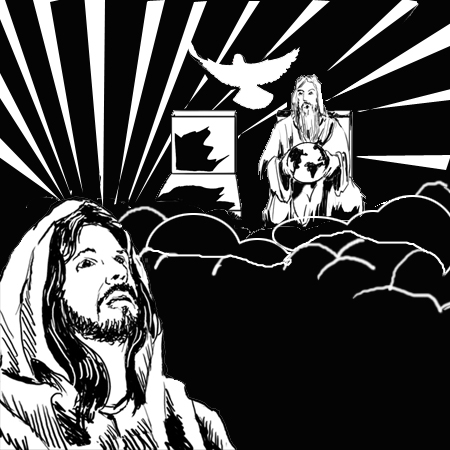 In the Old Testament, the mystery of the Trinity was not revealed to the chosen people. Surrounded by people who worshipped alien gods, the Jews were taught by Moses to worship one God and only one, not any other god (Dt 4:39). That is the essence of their religion of monotheism. Thus, for them, any revelation of the Trinity might have been mistaken for three gods. The three god or three-person notion is contradictory to the divine nature and might have weakened their belief in the one God.

Therefore, the Old Testament did not have anything to say explicitly about the Trinity. At times, the Old Testament implied something about the Trinity. For instance in the Book of Genesis, God speaks in a plural sense about himself: Let us make man in our image (Gn 1:26). The first personal pronoun in the plural sense here indicates more than one person in the Godhead.

When Jesus came down from heaven, the doctrine of the Holy Trinity was revealed to us. When John the Baptist baptized Jesus at the Jordan River, the Holy Spirit and the Father were also revealed as recorded in today’s gospel: He saw the Spirit descend like a dove and hover over him (Mt 3:16). Then Jesus heard a voice: This is my beloved Son (v. 17). At the last supper, Jesus also revealed the Holy Spirit to the apostles: It is much better for you that I go. If I fail to go, the Paraclete will never come to you (Jn 16:7).

Thus in the history of salvation, God the Father is revealed first, then the Son, and the Holy Spirit. The three divine persons in one God is a mystery. We can use a triangle to explain this mystery. In an equal and symmetrical triangle, three sides are equal and three angels equal. St Patrick made use of a shamrock to compare to the mystery of the Trinity. He showed a shamrock to the Irish people and asked them how many shamrocks they saw and they replied one. Then he asked them how many leaves in it and they said three.

In some mission countries in the past, people learned catechism by reciting questions and answers provided in the book for rote memory. The students responded according to what they read from the book or according to what they heard from others. For instance, they recited a question: How many persons are there in one God.  They recited the answer by themselves: God has three persons: the first person is God the Father, the second person is the Son, and the third person is the Holy Spirit.  Another question they recited: In the three persons, is there any person first or last, any person superior, any person inferior? Then they recited according to the catechism: The three persons are equal. The reason why Catholics in some countries in the old days studied by rote memory was because of lack of books and many people were illiterate. To learn by rote memory was beneficial in order to engrave upon their memory a perseverant faith.

To know of the mystery of the Trinity would enrich the spiritual life of the Christian. To know of God the Father as the creator, God the Son as the redeemer and God the Holy Spirit as the sanctifier, comforter and fortifier should help facilitate our prayers, help us know how to ask which Person appropriately. Theologically speaking, to pray to one person is to pray to another person since the Father, the Son and the Holy Spirit are one.

However, psychologically speaking, to be sure of response from God, we can pray to all three Persons at the same time: the Father, the Son and the Holy Spirit, asking the Trinity to help us with this or that. So today on the Holy Trinity, we need to answer for ourselves those questions. Are we aware of the holy Trinity’s place in our lives? Does the sign of the cross remind us of the cross on which Jesus died for our sins? Did we make the sign of the cross with meaning and understanding or did we do it in a mechanical way and in a routine fashion?

Prayer to know how to worship the Holy Trinity:

We worship you; we give you thanks and glorify your name.

We thank you for your work of creation,

your work of redemption and sanctification.

Come to my assistance

calling upon your name. Amen.