26 Sun. / Ord., B: Cooperating in the works of glorifyng God 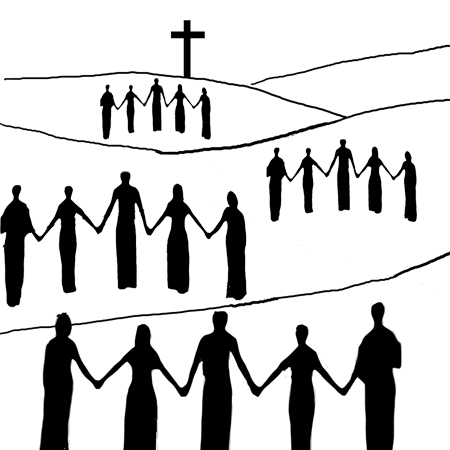 When we compare ourselves with others, we tend to come up with feelings of jealousy and envy if we find others superior to us in certain area. The reason for that is we are afraid of losing influence or being threatened. When Moses received the spirit of God descending on him, he bestowed some of it upon the seventy elders who were in the tent with him.

The other two elders named Eldad and Medad, not in the tent received the gift of prophecy (Nm 11:27). That bothered Joshua. Thus, Moses told Joshua not to worry because the more there are people to prophesy, the better-glorified God is.

The Apostle John in turn, as we learn from today’s Gospel, also misunderstood this notion of glorifying God. John had a problem when Jesus sent out his spirit to his hearers. John became jealous because somebody else also acted in the spirit of God (Mk 9:38). John meant somebody who did not belong to the group of the apostles, also used Jesus’ name to expel demons.

Jesus told him: There is no one who performs a mighty deed in my name who can, at the same time, speak ill of me (Mk 9:39). Thus, according to what Jesus teaches in today’s Gospel, we should not be so narrow-minded that we want to monopolize religious, charitable and social works that we try to prevent others from doing so. To prevent others or other groups, not belonging to the same organization or religion of ours, from doing charitable, social works, is to limit God’s glory.

We should rejoice in every good work done by any person or group even though that person or group does not belong to our group or we do not like that person or group. The faithful need to cooperate with those of good will who are seeking to alleviate the suffering of humankind, to improve human dignity, and to advocate justice and charity.

In today’s Gospel, Jesus does not say the one driving out demons (Mk 9:38) does not need to be united with the apostolic group. Jesus only told John not to stop him. Thus, the faithful still need to pray for unity of the faith in Jesus. If Jesus taught us to rejoice in every good work performed and to cooperate with people in doing good works, he told us to avoid evil and bad examples, because bad examples and evil dim God’s name.

Jesus told us not to scandalize little children because their faith is still fragile. He said those who give bad examples or scandal to those of weak faith are to be accountable for their words or actions. Scandal can be caused by word or action which can be imitated by others especially children. Scandal or bad example is a double sin, because it is a sin of a person involved, and it is a cause or an occasion for others to sin. If Jesus told us to cooperate with people of good will and advocate good deeds, he also told us to repudiate evil deeds and injustice in our human society. If things we have, things we do, or if a part of our body causes us to sin, and endanger our faith and our salvation, Jesus told us to watch out or to put them under control. Thus, if television, movie picture, books and magazines and internet can demoralize our life, or weaken our faith, or stand on the way of our relationship with God, or become obstacles to our salvation, then, we have to bring them under control or to get rid of them. What Jesus taught us in today’s Gospel is we must be ready to lose a hand, a foot, or an eye if they should be obstacles to our salvation.

When Jesus said it is better to enter the kingdom with one hand (v.43), one foot (v. 45), one eye than to be thrown into Gehenna with both hands, both feet, and both eyes (v.47), it meant in a metaphorical sense, emphasizing the values of the kingdom of heaven more than a member of the body, not necessary to be understood in a literal sense. We may find it difficult to believe in Jesus’ words because God’s way is different from our way and God’s value system is different from our value system.

Jesus has come to turn our human upside down because our value system has been contaminated by our sins. For that reason, God gave us the Ten Commandments and the gospel teachings, which spell out what is to be avoided and what is to be done in order to enter the kingdom of heaven.

In the Our Father, Jesus taught the apostles to pray: Hallowed be thy name. How can we make God’s name hallowed? In other words, how can we make his name glorified? When we cooperate with those of good will to do charitable, social and humanitarian works for the glory of God as well as to avoid sins and bad examples that can dim his name, then we make God’s name hallowed and glorified.

Prayer for God’s name to be glorified:

In the Our Father,

you taught us to pray for God’s name to be hallowed.

Teach me to do everything and cooperate with others

to work for the glory of God.

Also, teach me to avoid and stop things

that might dim your name: that is sin  and vices

so that your name may be known. Amen.