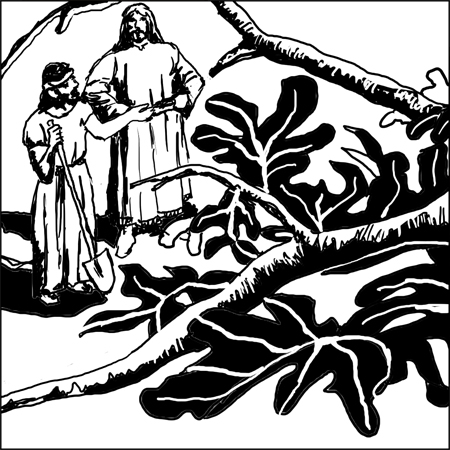 Oftentimes when we read the bible, we tend to select passages that contain words of consolation and encouragement, words that can uplift our minds and hearts. However, the bible also contains words of warning and condemnation. In today’s Gospel, some people came forward to tell Jesus about Pilate’s plot to attack a protest demonstration ruthlessly. They seemed to blame the Galileans for their imprudent action and to hint their sinfulness that caused them to die. It was because Pilate decided to rebuild an aqueduct to Jerusalem, a project useful to the public.

However, a number of people protested because Pilate used money from the temple treasury for the reconstruction of the aqueduct. Therefore, they took to the streets in protest during the hour of sacrificial offering. Pilate ordered his soldiers to disguise themselves with yataghans [1] concealed and mingle with the crowd. Then at a signal, the soldiers attacked the crowd wantonly and repeatedly, causing many to die including Galileans. What Pilate did was ruthless and cruel.

Jesus told them these Galileans killed by Pilate were not greater sinners than other Galileans. In other words, Jesus rejected the causal relation in this case. However, he said if those who had brought up the story, do not repent, would die like that also: If you do not repent, you will all perish as they did (Lk 13:3). Jesus still took another example about eighteen people who were killed when the tower of Siloam [2] fell on them, not because they were more guilty than others in Jerusalem, but if anyone who does not repent, will perish like that. Jesus meant these two events served as warnings to those who do not repent. Repentance in a biblical sense means turning away from sin and turning toward God.

Based on the two examples, Jesus used to warn the crowd in the Gospel, we should ask ourselves if we consider natural disasters such as earthquake, flood, storm, hurricane or accidents such as fire, war, violence, shipwreck, airplane crash, automobile accident or diseases as warnings to us. To say right out, do we think we can die anytime, anywhere and by any means, even though we are still young and healthy?

Do these disasters and accidents help us in any way to change our lives: Do we let these events pass by without drawing any applicable lesson? Saint Paul reminded the Corinthians: Whoever thinks he is standing secure should take care not to fall (1Cr 10:12). He told them that God gave much favor to his chosen people in their deliverance from the Egyptian slavery (1Cor 10:1). That was a deliverance, which God told Moses to prepare to lead them to the Promised Land (Ex 3:8a).

In the desert, God fed them miraculously. They knew they were God’s chosen people. However, in the desert, they offended God. They fell into a complacent attitude. They thought everything in their lives was good, and God would take care of them, regardless of what they did. They thought they were superior to other people. From these arrogant attitudes, they lost favor with God. As Saint Paul said: God was not pleased with most of them, for they were struck down in the desert (1Cor 10:5).Through the water of baptism, we were delivered from exile in sin and became the new chosen people. Like the Israelites, we may fall into complacency. In reality, God is patient with us and gives us many opportunities to amend our lives.

He gives us time for further cultivation, fertilization and nourishment so that we can bear fruit in our lives as a gardener cultivates and fertilizes the soil, as to expect a fig tree to bear fruit (Lk 13:8-9). That is the meaning of the parable of the fig tree in today’s gospel. Like the landowner who expects his fig tree to bear fruit, God also expects us to bear fruit in our lives. However how can we bear fruit in the barren soil of our soul? In order to bear good fruit in our lives, we must cultivate and prune, fertilize and water our soul. What does it mean to prune our lives? We must cut off attachments to sin and vices, and occasion of sin. Then we have to hoe and cultivate our spiritual lives by mass attendance, prayers, fasting, abstinence and works of charity. We have to fertilize and water our soul by spiritual food: the word of God in the bible and the body of Christ in the Eucharist.

The Church uses Lent as a means to help us see where we stand before God as to repent and return to him. Oftentimes we find it easy to find faults in others, but difficult to accept our failures. When there is a dispute with others, we always think we are right. When talking about sin, we often see sin in deeds; seldom have we seen sin in thoughts and words. Yet Jesus tells us: Wicked designs come from the deep recesses of the heart (Mk 7:22). Psychologists also confirm that ideas direct actions.

Prayer for our lives to be fruitful:

You used many occasions to warn humankind.

You gave them many times to repent,

and patiently waited them to return to you.

Teach me to listen to your word of warning

so that my life may change and bear fruits. Amen.

[1] Yataghan, according to Webster’s dictionary, is a type of knife or short sword with a double-curved blade and a handle without a guard.

[2] The tower of Siloam built on the south side of the Temple. It was fallen in the construction and the foundation of it found in the 1914 excavation.