4 Sun. / Ord. B: Teaching with authority and conviction 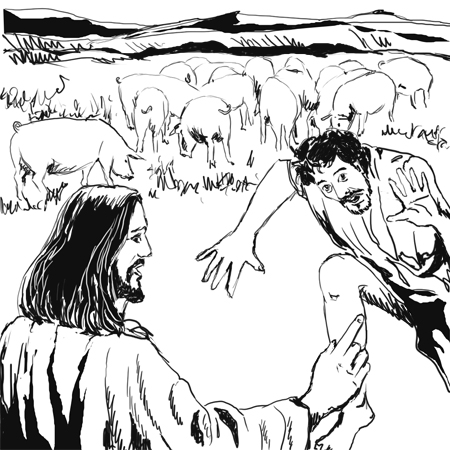 4 Sunday of the Year B

Did you ever tune in the radio or television, and hear people talk about certain subjects such as politics or religion, which you could not stand and you used a remote control to turn it off right away? Here it was not meant any particular speaker or any religion, but it is only meant generally. The reasons are not that the speaker has had a monotonous voice; on the contrary, he or she might have been a good public speaker. Yet, you were sick of their talk because it was somewhat phony, boastful and fallacious, full of baloney in their presentation.

At the synagogue at Capernaum, the chief priest or a leader of the synagogue could invite educated and influential people to address the congregation. Therefore, the scribes had been to be invited before and today Jesus was invited to preach at the synagogue. How did Jesus preach? The Gospel tells us: The people were astonished at his teaching, for he taught them as one having authority and not as the scribes (Mk 1:22). If the audience in today’s Gospel had heard Jesus at the temple of Jerusalem when he was twelve, they would have been amazed at his intelligence and his answers (Lk 2:47). Alternatively, if they had heard him at the synagogues of Nazareth, they would have marveled at the appealing discourse which came from his lips (Lk 4:22).

Today’s gospel also records: He commands even the unclean spirits and they obeyed him (Mk 1:27). So how did the scribes preach? When preaching, the scribes often quoted the ancient teaching of the rabbis and gave the most common opinion on the subject. They admitted they only taught by the authority, which Moses received, from God. They often avoided definite answers to people’s questions. Even the prophets also began their words with the phrase: Thus says the Lord God. This indicated that the prophets did not speak on their own authority, but on God’s authority. When Jesus came, he broke with this tradition. Jesus proved his words, not on anybody’s authority, but on his own. That is why he could say: You have heard the commandment (Mt 5: 21, 27, 31, 33, 38, 43). What I say to you is (Mt 5:22, 28, 32, 34, 39, 44). When people asked Jesus a question, yet not for information, but for finding fault with him and trapping him, Jesus showed his authority by answering their question with his question. For instance, when Jesus preached in the temple, the chief priests, the scribes and the elders asked him: On what authority are you doing these things (Mk 11:28).

Jesus responded: I will ask you a question. If you give me an answer, I will tell you on what authority I do the things I do (Mk 11:29). Jesus did not rely on tricks or flatteries and he still kept the attention of his audience because he had conviction of his words. He believed what he said and he said things, which he wanted people to believe. Jesus did not prove his teaching by quotation from others. He answered questions directly and accurately. He lived what he preached and had personal experience of it. For he was convinced of his teaching, he did not compromise. That proved what he said was the word of God, not the opinion of people. From his public life, people saw him preach and act based on his authority as the Savior, the Son of God.

That’s why before he went up to heaven, he commanded his disciples: Full authority has been given to me, both in heaven and on earth; go therefore and make disciples of all the nations. Baptize them in the name of the Father and of the Son and of the Holy Spirit. Teach them to carry out everything I have commanded you (Mt 28:18-20).

The word of God in the book of Deuteronomy tells Moses that the true prophet must speak the word of God in his name (Dt 18:20). However, due to internal ignorance or external pressure, those who preach the word of God may misinterpret the word of God or distort his word, making the teaching of religion less restricted as to attack more followers. However, in the end, only the authoritative teaching of the gospel would have the driving force to bring people to God, draw them together, and unite them with the Church, which Jesus instituted. Through Baptism and Confirmation, the faithful are called to bear witness to the word of God.

For practical application, today we pray that we may listen to the word of God, put our faith in his word and his power over evil spirits (Mk 1:27). If we want to participate in Jesus’s authority of his word, in other words, if we want people to be attentive to our preaching or writing, we have to be faithful to God’s words. We also pray that we may differentiate true prophets from false prophets.

As described in scripture, false prophets tend to compromise according to people’s interests and wishes. Accordingly, their preaching tends to please the audience. They can tickle the ears of the hearer, but are unable to touch their hearts. True prophets, on the contrary, have conviction that they are God’s messengers. They dare to speak the truth uncompromisingly even though it might hurt. To hear the truthful message can make the hearer feel uneasy and thus make him/her think. To make one think is the first step for decision to change the life of the hearer.

A prayer for following the truthful message of the Gospel:

Oh, Lord our God! Your words are spirit and life.

Every day there are many voices

telling us what is right and wrong or what to believe or doubt.

Teach me to listen and know right from wrong.

and put them into practice